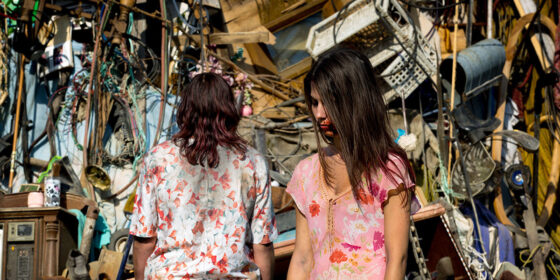 While it could be said that the last thing the world needs is another zombie movie, Québécois director Robin Aubert has managed to offer a solid and at times even original survey of this well-trod terrain. Where so many other genre filmmakers make the mistake of trying to add their unique spin on the material, Aubert wisely takes another tack. Les Affamés (“The Hungry”) is notable for what it doesn’t do: there’s no symbolism to speak of; the walking dead are not a stand-in for any global ill or displaced population. They just are, and you don’t want to get bitten by them.

Likewise, the zombies eventually offer hints that they might be semi-sentient. But the film never explores this question, preferring to leave it as strange and inexplicable as Tania (Monia Chokri) and her ever-present accordion. Les Affamés doesn’t avoid all clichés, such as the winnowing away of the main characters in the final showdown. But even this is relatively casual in its treatment. In other words, Aubert takes the opportunities provided by high-concept filmmaking, to resist blatant signposting and explore a more casual form of naturalism.