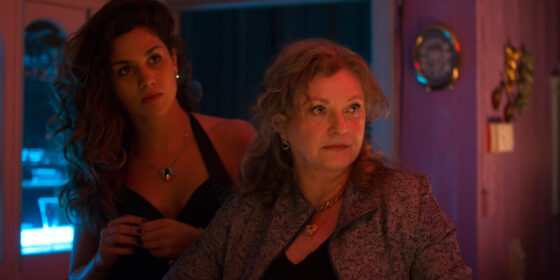 The particular circumstances of Le Ciel Flamand turn its plot twists into a rather dire matter of politics. If Peter Monsaert’s film were about an ordinary workplace—if Sylvie (Sara Vertongen) and her mother Monique (Ingrid De Vos) ran a diner or a print shop rather than a brothel—then of course there would be no hook to the film. But this would also mean that, if a struggling single mother were caught up in some sort of incident whereby her young daughter (Esra Vandenbussche) happened upon an unsafe situation at her mother’s place of employment, there would not be the same sort of self-loathing and moral opprobrium, or at least it would not take the same acute form as it does with Sylvie.

This is clearly the driving point of Le Ciel Flamand. Sex workers are professionals who provide a service, one of which a significant portion of the population avails itself. And yet they are confronted with sexism, judgment, and a lack of basic protections. Nevertheless, however noble Monsaert’s intentions may be, Le Ciel Flamand is a film that implicitly argues against everything it would appear to support. The opening 30 minutes are actually rather impressive in their observational candour. The eponymous brothel, located just inside the border with France, is depicted as a casual, even pleasant workplace. Most importantly, Sylvie and Monique do as well as they can to keep Sylvie’s young daughter Eline well away from the, um, ins and outs of the family business.

Once The Incident occurs, Le Ciel Flamand not only heads into the sort of panic mode that most films about sex work occupy from the get-go, but most damningly, Monsaert gradually shifts his focus from Sylvie to Uncle Dirk (Wim Willaert), Eline’s father. Although he and Sylvie do not formally share custody, he and Eline do spend time together regularly. He never claimed his family openly because his mother wouldn’t have approved of Sylvie’s career; now that mom is dead, Dirk is trying to establish a place in their lives. Recognizing his own culpability in Eline’s lack of safety, he steps up as a father by assuming a Charles Bronson posture. And Le Ciel Flamand completes its transformation from a feminist volley toward the normalization of sex work into another male redemption narrative. Following the film’s own convoluted logic, we’re left to wonder why Dirk felt so sullied in the first place.