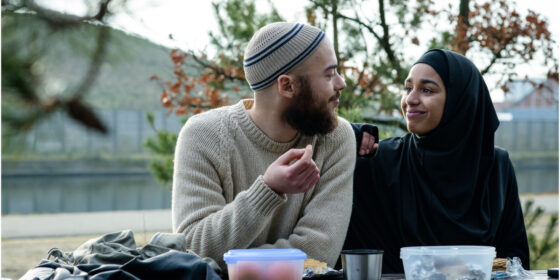 The youth-in-extremis movie gets a relatively fresh new face in Mijke de Jong’s Layla M., which, together with Barry Jenkins’ Moonlight, positions TIFF’s Platform programme as a quality clearing house for coming-of-age melodramas with a critical difference. Here the point of distinction is the budding radicalism of the heretofore university-bound Layla (Nora El Koussour), a Dutch-Moroccan teen whose growing devotion to Islam—and specifically to its radical fringe online—puts her at odds with both Amsterdam’s xenophobic whites and her more or less secular middle class family. Layla starts by tiptoeing into liberationist memes about burqas, whose construction de Jong charts in loving procedural detail, then graduates to marrying an equally devout jihadist she meets online and relocating to Amman, Jordan, where she’s sidelined to serving duties as the men host grim meetings about taking direct action, never stopping to consider that she’ll be implicated in their plots.

Layla M.’s progression from youthful enchantment to adult exhaustion (as well as from liberation to newfound oppression) feels too fast and more than a little tired; the closest analogue in recent years is probably Olivier Assayas’ Something in the Air (2012), which similarly finds its plucky protagonist sidelined by the end to dirty-dish duty while twentysomething radical dudes plan their very important protests in the living room. De Jong is also guilty of relying on visual shortcuts to chart Layla’s radicalization, decontextualized moments where, for instance, we see her silently parked in front of her laptop, watching jihadist propaganda instead of doing her homework. But there’s a believable, shopworn naturalism to the performances, and a particular spontaneity and vibrancy to El Koussour, whose Layla just barely suppresses her innate insolence whenever a patriarch— whether her father or her husband—has the gall to put her in her place.