The Land of Steady Habits (Nicole Holofcener, US) — Special Presentations 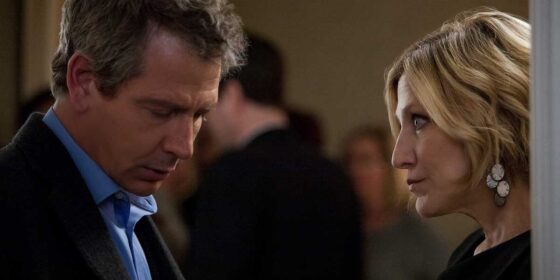 Every day is a film festival on Netflix, and so Nicole Holofcener’s unfortunately-titled The Land of Steady Habits (I guess it’s a slang phrase for Connecticut) touches down as the lights adorning #TIFF18 are finally unplugged. Even if Steady Habits weren’t, as trade critics like to say, “better than it has any right to be,” any new Holofcener film is an event. For those with a sincere (as opposed to morbid, or festival-season dictated) interest in humble genre cinema about the foibles of day-to-day life, Holofcener’s dramedies Walking and Talking and Lovely and Amazing are the gold standard; in 2013’s Enough Said, she gave James Gandolfini a surprisingly tender role as a romantic lead. Like Nancy Meyers, the bank account balances of her characters skew to the upper-upper-middle; unlike Meyers, she’s relentlessly focused on the inevitable hold-ups (or, per Zizek, “blots”) preventing these suburbanites from living their best lives. Much has been commented on the male-centric milieu of Steady Habits (a first for Holofcener), which stars Ben Mendelsohn as the unfortunately-named Harris Anders, a Wall Street type who’s retired early, only to jettison his wife Helene (Edie Falco) and 27-year-old son Preston (Thomas Mann) for…what, exactly?

Mendelsohn gives a slurry, dissembling performance as a man who truly cannot help but make any bad situation worse, just as uncomfortable in his roles as supposedly concerned parent and newfound bachelor (and unable to perform in the bedroom.) He comes to realize he actually hates his old friend Mitchell (played by Michael Gaston, closing out a year of bull-in-china-shop features from You Were Never Really Here to First Reformed) after Mitchell’s son Charlie goes missing, last seen smoking PCP at a party with his friends…and with Anders. Anders’ feelings of entitlement to his old house and family, as well as his supposedly new lease on life, incur further rancid behaviour even when he is supposedly at his most free. The opening scene, wherein he picks up a younger woman while stupefied over his consumer options at a Bed Bath & Beyond, functions as parody of the middle-of-life learning-to-love again shelf onto which Steady Habits presumably wishes to be slotted. While Holofcener (adapting a 2014 novel by Ted Thompson) uses sometimes pat templates to explore the heart of bourgeois darkness, it must be said the end product is far less neutered than one would expect. The film culminates in an ode to sobriety (via Preston’s decision to lay a magnum of champagne down on a train track) and second chances, even for those who, like Anders, don’t even come close to deserving them.