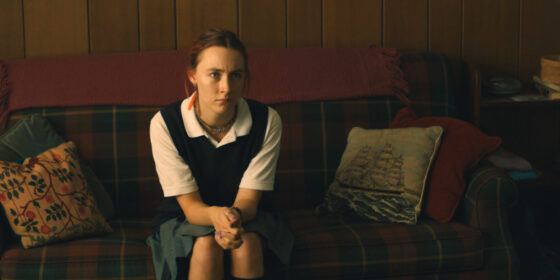 Greta Gerwig’s debut feature is like something akin to asking a classmate to sign your yearbook and getting a detailed novella in return, or a pink plaster cast scrawled with a poem. It’s also proof that Gerwig is clearly her own muse. The film opens with a cheeky quote from Joan Didion about Sacramento, but the homage might be reciprocated when she writes, in White Album, “A place belongs forever to whoever claims it hardest, remembers it most obsessively, wrenches it from itself, shapes it, renders it, loves it so radically that (s)he remakes it…” Gerwig clearly does not love her native habitat so radically, but does wrench it from itself and render it, if not in the utter banality of strip-mall culture, then in the verbal wit of adolescence refracted through a 2000s zeitgeist. The haltings of high-school identity seem inseparable from the torpor of place, with dreams of elsewhere—East Coast colleges, Europe, even someone mishearing Sacramento for San Francisco at a loud party—informing Christine/Lady Bird’s (Saoirse Ronan) aspirational horizon.

Foremost on her agenda, however, is surviving Catholic school (as a non-believer), losing her virginity (even though her new boyfriend, the lead in the school play, might be gay), getting her driver’s license, and finding out who her true friends are (it’s not the girl with an SUV and a tanning bed in her home). “Boredom is a desire for desires” is scrawled amidst the aphoristic graffiti on her bedroom wall, suggesting that Lady Bird suffers from precociousness more than petulance. Still, in spite of shedding tears with her mother after enduring The Grapes of Wrath (books on tape, naturally) together, she’s soon tossing herself from the car window (literally) in frustration from that localized yet eternal conflict between mother and daughter. They haggle over everything, including a prom dress that becomes a significant point of contention, not for its colour but for what it means to be looked at and seen. The point is driven home by a savvy Sister at school, who forgives Lady Bird for a heretical pranking, but advises her that maybe attention is a form of love.

In spite of the forgettable milieu of high-school twilight—Gerwig seems to delight in the frivolity of it all, this being a comedy—there is something that remains when the humour and humiliation have worn off, which is that everyone hates those years while still holding on to them dearly for life. It’s as if Gerwig was retroactively auditioning for the school talent show, exorcising necessary demons in the process, and remembering the details with acute attention. Perhaps, as with Didion, the lament is also an homage. And sometimes love is a delayed emotion.