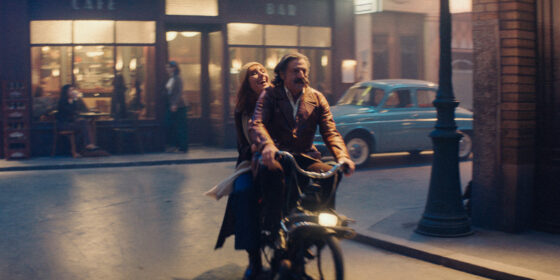 Nicolas Bedos’ second feature intends to evoke the feel of a classic screwball comedy, albeit one with a modern twist in both production and subject matter. The film’s rapid-fire dialogue is a throwback, yet the quick-cutting, handheld camerawork and light commentary on our technologically mediated relationships pushes it somewhere new. While nostalgia eventually does win out, Bedos’ writing and direction provide enough room for his venerable actors, Daniel Auteuil and Fanny Ardant, to deliver some emotional heft to the film’s high-concept premise.

Said premise involves a company run by Antoine (Guillaume Canet) that invites customers into full-scale theatrical recreations of the past. One such customer, Victor (Auteuil), a disgruntled, out-of-step cartoonist, requests a return to his youth in 1974 after the recent collapse of his marriage to Marianne (Ardant). Once there, Margot (Doria Tillier), Antoine’s lover, is tasked with playing Victor’s old—and new—flame. With his script’s obvious romantic triangles, Bedos can’t help but lean into some familiar clichés, though he does use the film’s ersatz setting as a clever idealization of memory, turning lazy filmmaking into something of a design feature (and casting Canet, a middlebrow director, as a corporate showman makes sense too). By the final third, the film’s conceit is stretched as far as it can go, nimbly locating a middle ground between Antoine’s need for control and Victor’s desire to give it up. That La belle époque ultimately shies away from a more explosive critique of the boomer petit bourgeois on which it opens is no great disappointment. Like its characters, the film slows down instead, turning sentimental—and managing in the process to find something real.