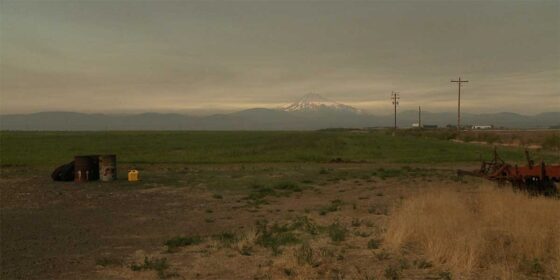 Since leaving celluloid behind around a decade ago, James Benning has become ever more invested in the durational opportunities offered by digital formats, with his numerous recent landscape films in particular often stringing together a mere handful of sustained shots or even just unfolding across one. L. COHEN continues this tradition while gently complicating it, as the film’s title alone imbues its single, 45-minute shot of a landscape with the spirit of the much-missed Canadian singer-songwriter, even if that weren’t already the average length of an album.

According to Benning’s description of the film, the shot in question, which showcases his unbroken talent for framing, is of “a farm field in Oregon on a very special day.” Dry grass and dirt give way to a green field with telegraph poles and hedgerows to the left and eventually a backdrop of distant buildings and far-off mountains, with the rusty plough and ensemble of tires, drums, and a yellow fuel can in the foreground functioning more and more like elements of a still life the longer they are surveyed. This is also due to the conspicuous lack of movement in the frame, as there is barely any wind and the overcast sky renders most shifts in light as minor. As always with Benning, duration makes the eye ever more alert to change; in its absence, the temptation to project Cohen into the gap only grows.

Yet the all-pervasive stillness doesn’t mean that nothing happens in L. COHEN, as Benning is just as interested in the effects produced when the prevailing mood changes, whether via natural phenomenon or external addition; things happen on special days. The resultant bell curve trajectory models how a life gradually merges with a landscape until both sink (back) into quiet—a process as meditative as it is melancholy, and one that equally seems to be referencing Cohen’s own words: “All busy in the sunlight/The flecks did float and dance/And I was tumbled up with them/In formless circumstance.”