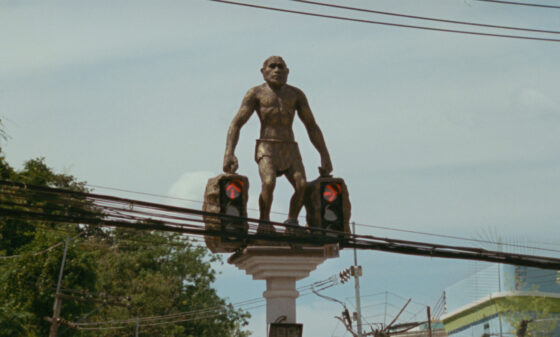 Since Ben Rivers is credited as co-director of Krabi 2562, there could be the assumption that this is another “Ben Rivers film.” The many instances in this project where assumptions are wrong start here, because Rivers has completely given himself over to his collaborator, the gifted Anocha Suwichakornpong, who is absolutely the boss of this endeavour. There’s hardly a moment in what is surely one of the most fascinating and indelible movies to emerge from the 2019 edition of the Locarno Film Festival that lacks the personal stamp of Suwichakornpong. In fact, Krabi 2562 is not only her third feature as writer-director (along with five shorts and the omnibus movie Breakfast Lunch Dinner [2010]), but it’s unmistakably the third part of what can be viewed as a trilogy on the struggles of Thai filmmakers over the past decade.

Suwichakornpong’s superb feature debut, Mundane History (2009), concerned a paralyzed filmmaker and his nurse, along with his dreams and his movies (either in his head or to come, we can be never be certain). By the Time It Gets Dark (2016) drew a more political line in the sand, involving a filmmaker investigating a notorious 1970s student massacre by police. Krabi 2562 partly focuses on a location scout working for a production and then disappearing. With each work, the interwoven layers of storytelling grow more complex, time signatures slip and shift, a Buddhist reality explodes in the viewer’s sensibilities, and the quiet tone of the surface belies a puckish humor and anarchistic taste.

What opens up in the new movie is an investigation into the scout’s disappearance, a search for a searcher, slip-sliding into a tale of ancient cave-dwellers whose existence appears to happen both in the past and the present, where young people work in the tourism and the TV commercial businesses amidst the exotic glories of the vacation getaway spot of Krabi. Quiet jokes abound, Antonionian mystery morphs into magic, and however Ben Rivers contributed matters not in the end. Everyone seems to have had a pretty good time.