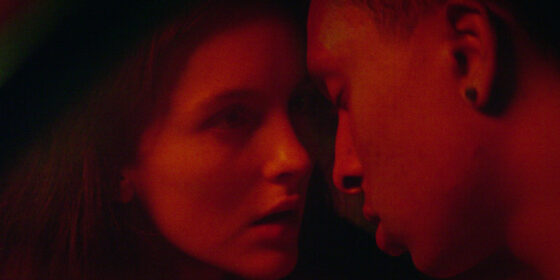 Any discussion about Kissing Candice begins with cinematographer Steve Annis, who, up until now, has been a specialist in music videos for Nick Cave, Florence and the Machine, U2, and Bryan Ferry. Operating in anamorphic widescreen with writer-director Aoife McArdle (herself a music-video veteran, who previously collaborated with the cinematographer for U2’s “Every Breaking Wave”) and shooting in a seaside town in Northern Ireland, Annis creates a set of images that heighten the light, atmosphere, and elements of the location in a way that’s comparable, in my viewing, only to Nestor Almendros’ work on Days of Heaven. That may sound like a rather ridiculous level of praise [Ed. note: Yes, it does], but it may actually be understating the case.

That said, the movie itself (McArdle’s first feature) isn’t quite worth Annis’ depth of vision; Kissing Candice is a gorgeous filigree, a shallow slice of Northern Irish adolescent angst. Teenage Candice (Ann Skelly) is prone to hallucinations and seizures, sometimes prompting visions of her sleepwalking boyfriend, a reluctant (and the only black) member of a local gang of layabout ruffians. Even though Candice’s dad is a local detective on the force, he or anyone else can’t seem to stop the group of lads from wreaking havoc wherever they go. The story goes from dumb to dumber, and never has a grip on Candice’s opaque if intensely physical presence, let alone her character. The closest the movie gets is through Annis’ image roll, suggesting the inside of her head roiling in a world of stormy skyscapes, crimson fires, and shattering colours.