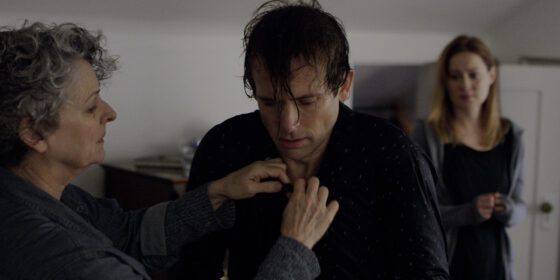 Are there citizens of any other nation who have as strained a relationship with their national cinema than Canadians? This may well be one of the only countries in the world to call its own cinematic output by name: they’re not just movies, they’re Canadian movies, an unofficial shorthand to denote a cinema of bland, forgettable dramas that poorly ape slick American indie flicks. With Bruce Sweeney’s Kingsway, another one bites the dust.

The hint of an extramarital affair radiates through a dysfunctional family of two adult siblings, Matt (Jeff Gladstone) and Jess (Camille Sullivan), and their mother Mary (Gabrielle Rose). When Matt spots his wife’s motorcycle parked outside a seedy motel on Vancouver’s Kingsway, he and his sister suspect the worst. For Matt, it triggers another bout in his ongoing struggle with depression and anxiety; for Jess, it sends her on a crusade to finally break up her mopey brother and shrill sister-in-law for good.

Kingsway suffers from complete tonal whiplash, broadly trying to articulate ultra-serious discussions of mental health in a movie that also contains an off-putting running gag involving family members accidentally spying on each other having sex. It also contains utterly baffling misconceptions about how pregnancy works, upon which the film’s limp climax hinges. The only respite from the mediocrity is a mid-film needle drop of Destroyer’s “Tinseltown Swimming in Blood.” Our movies may be hit or miss, but at least our music is good.