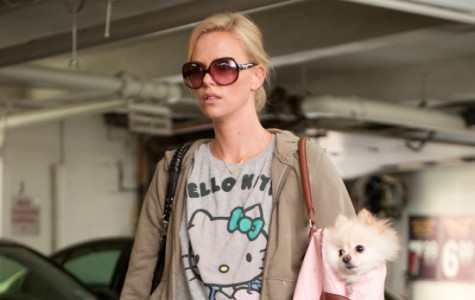 In his review of Jason Reitman’s Young Adult, J. Hoberman informs us that its protagonist, 37-year-old hack writer Mavis Gary (Charlize Theron), “packs up and drives back to [her hometown of] Mercury, Minnesota, while playing a vintage mix tape heavy on The Replacements.” This is incorrect: the song that Mavis keeps blasting as she cruises down the highway is actually Teenage Fanclub’s  “The Concept,” with its deathless opening couplet: “she wears denim wherever she goes / says she’s gonna get some records by the status quo.”

If you don’t know the song, you will by the end of Young Adult’s opening credit sequence, which finds Mavis (but really Reitman) pathologically rewinding and restarting the song in 30-second bursts. It’s a mildly arresting bit of aural gamesmanship that swiftly draws a bead on Mavis’ character: professionally adrift and recently divorced, she’s trapped in a nostalgic loop, eager to return to her glory days as a high-school queen bee. It also foreshadows the scene where she goes to a bar in Mercury with her ex-boyfriend Buddy (Patrick Wilson) and seethes while his new partner (Elizabeth Reaser) gamely bangs her way through a cover of “The Concept” with her all-housewife band—stealing her song as an addendum to stealing her man.

Hoberman’s ears do not deceive him entirely, though. The Replacements do figure briefly in Young Adult, soundtracking another scene in the same dive bar. The song is “Achin’ to Be,” chosen, like “The Concept,” because it’s likely that she would have sung along to it at last call in the mid-‘90s—The Replacements hail from Minnesota and are a jukebox staple across the state—and also because it functions as an easy piece of character shorthand. The song is about a weird girl who is lonely and misunderstood; in 1988, ‘Mats super-fan Robert Christgau wrote: “[It] starts off ‘she’s kinda like an artist’ and never once slaps itself upside the head.”

I myself wanted to slap Reitman—whose trademark blend of edginess and sentimentality suggests he thinks of himself as the Paul Westerberg of cinema—upside the head after Up in the Air (2009). Truly one of the most repellent American films of recent years, that Oscar-nominated boondoggle was a crocodile tear-stained lament for the 1% that strands George Clooney in a first-class airport lounge of the soul while his downsized victims give thanks for the modest blessings of hearth and family. Like Thank You for Smoking (2005) and Juno (2007), it’s a film that reps a neo-conservative agenda with a hip, flip sensibility, an insidious combination that’s all the worse for the director’s relative cunning in putting it across.

Young Adult isn’t as hateful as Up in the Air, but it’s not quite as accomplished, either: in both tone and overall quality, it’s closer to Juno, which makes sense in that it’s Reitman’s second collaboration with Diablo Cody, whose screenplays are typically a mix of pyrotechnical dialogue and impoverished ideas. Juno barely skated by on its admiration for its verbose, self-possessed heroine, whose brittle eccentricities were of course preferable to the slick duplicity and/or sweet obliviousness of the well-heeled yuppies with designs on her unborn baby. Jennifer’s Body (2009), meanwhile, turned Megan Fox’s anodyne hotness into the butt of a predictable Mean Girl joke, rehashing high-school-as-monster-movie tropes already driven into the ground by an entire generation of post-Buffy projects.

Cody’s writing rarely convinces that its author is anything more than a pop-culture sponge, but Patton Oswalt is the right actor to act as her blasé, quasi-aggrieved mouthpiece. Casting the slacker godhead as Mavis’ semi-reluctant, half-disgusted/half-smitten partner in crime is quite shrewd, giving the film some effortless street cred to complement Theron’s energetic self-abasement. Oswalt’s Matt Freehauf, a former classmate who never left home, is both the halting, sarcastic voice of reason trying to talk Mavis out of her self-destructive reclamation project, and also her homely mirror image: stranded in his parents’ basement, brewing homemade bourbon and fussing over model action figures, he’s as stunted as his former high-school crush, just as unwilling to confront the terror of moving beyond his youthful (dis)comfort zone. But here (and not for the last time) Cody and Reitman overplay their hand: they literalize Matt’s hobbled attitude by making him physically infirm, the victim of a gay-bashing crime even though he wasn’t actually gay. Besides being an obvious metaphor for a wounded soul, Matt’s condition reduces him to a figure of pity; it’s the actor who gets his balls cut off as much as the character.

Even so, the little bit that’s affecting in Young Adult comes out of the interplay between Theron and Oswalt, who build a credibly tetchy rapport. When Mavis, deep in the throes of her crazed plan to win Buddy back from under his wife’s nose, calls Matt up to go get hammered, there’s a sense of people gleefully and gratefully slipping back into old behaviours. Mavis’ entire arc is regressive, and Theron, a capable comedienne, modulates these increasingly adolescent lapses with more patience and control than the screenplay deserves.

It’s hard to give an interesting performance, though, when every aspect of the film is calculated to choking off any hint of ambiguity or mystery. Case in point: Cody inserts sequences of Mavis typing away at her latest tween-novel project and setting up parallels between her contrived Sweet Valley High-lite plotting and her own personal and romantic setbacks. It’s a device meant to communicate the writer’s affectionate contempt for young-adult fiction, but it really implies how little she thinks of her audience—either that they’d be lost without this sort of obvious nudging, or that they’re impressed by it.

There’s more contempt to go around, of course, which is where Young Adult finally trips and falls head over spiked heels. The central comic mechanism is that we’re meant to find Mavis insufferable and hilarious at the same time—to be appalled by the way she acts towards everyone she meets while acknowledging that her caustic attitude and unapologetic self-interest make her, at least, an honest monster. The problem is that Reitman and Cody stack the deck by making almost everyone she runs across either a putz—i.e., Buddy, whose dimness in the face of his ex’s wild cougar attacks strains credibility—or a cipher, like Reaser’s boringly good-natured Beth, whose refusal to act as a conventional rom-com foil is less a case of a screenwriter trying to overturn conventions than drawing a blank and calling it portraiture.

Then there’s Collette Wolfe as Matt’s sister Sandra, who is so eager to be put in her place that it borders on pathological. It’s possible that the bit where the meek, ingratiating Sandra essentially validates Mavis’ sneering narcissism by pointing out how superior she is to all the people she’s tried and failed to reconnect with is meant to be funny: another example of somebody trapped in a young-adult loop, eternally sucking up to the head cheerleader. But considering the preceding, entirely objective depiction of Mercury as a strip-malled shithole filled with mediocre people, Sandra’s pep talk seems meant less as a complimentary bit of self-delusion than a fair assessment of why our sympathies should lie with Mavis—after she’s been thoroughly and entertainingly humiliated of course, and also done her due diligence by pity-fucking her grateful pet cripple on her way out of town.

“She’s kinda like a movie everybody rushes to see/but nobody understands it/sitting in their seats,” sings Westerberg in “Achin’ To Be.” The problem with Young Adult is that it’s all too easy to understand what Reitman and Cody are all about. They’re not even kinda like artists: instead, they’re utterly conventional mainstream entertainers who flaunt mildly outside-the-box tastes to pander to an audience eager to be flattered for its savvy in nodding along, be it via a chugging Replacements ballad or a so-pointed-it-could-put-somebody’s-eye-out running gag where Mavis spaces out in front of hotel-room broadcasts of Keeping Up the Kardashians. This is probably meant as a commentary on a pop culture that venerates spoiled, delusional, vacuous women so long as they’re appropriately telegenic, but this satirical concept is wasted: it’s hard to buy Reitman and Cody as being on the record against the status quo when that’s exactly what they are.