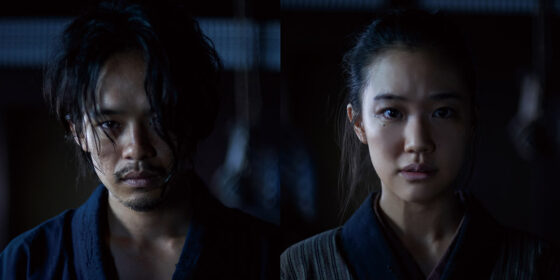 Tsukamoto Shinya’s Killing is the kind of movie that lives to be pull-quoted as “masterful”: a revisionist drama about a masterless samurai roaming late-feudal Japan (a subgenre known as chanbara) shot on crisp high-definition video, with an insanely sick sword battle at its centre. Tsukamoto stars as a cool-and-collected ronin named Sawamura who arrives in a small village looking for warriors to take to Edo to topple the crumbling shogunate. He finds a recruit in Tsuzuki (Sosuke Ikematsu), a young farmer who’s been endlessly practicing his moves with neighbour Ichisuke (Ryusei Maeda), both anxious for a shot at proving themselves. Sawamura arrives at the perfect time, even though Ichisuke’s sister Yu (Yu Aoi), who has an unconsummated romance with Tsuzuki, is fully aware there’s plenty of less glamorous work to be done on the farm. Tsukamoto’s script establishes a yawning disparity between day-to-day drudgery and the glories of combat, but also toes an uneasy line between presenting danger (in the guise of a roving pack of outlaws, covered in soot and ready to get into some shit) as real or as imagined.

Killing’s few fight sequences have the same gnashing energy as Tsukamoto’s city-punk classics Tetsuo: The Iron Man and Tokyo Fist, but deployed to more judicious ends: blood is drawn as a last resort, there’s no glory in felling your opponent, and Sawamura and Tsuzuki’s blades are so fine they appear almost translucent, ethereal, out of focus. Tsukamoto’s signature camera language gives tactile proportion to the older samurai’s swiftness with the blade, while his would-be student’s trembling inability to fight becomes a core—you could even say fatal—insufficiency, recalling the psychosexual mania of Duel in the Sun or The Left-Handed Gun. Faced with danger, he faints; when he should be honing his skills ahead of the pilgrimage, he’s bedridden. Sawamura sticks with him nevertheless, and retribution begets more violence. Killing becomes a bloody rumination on the inevitability of its namesake, whether as cruel punishment or as necessary self-defense, before pointedly blurring the line between the two: “If you can’t kill, your sword is useless.”