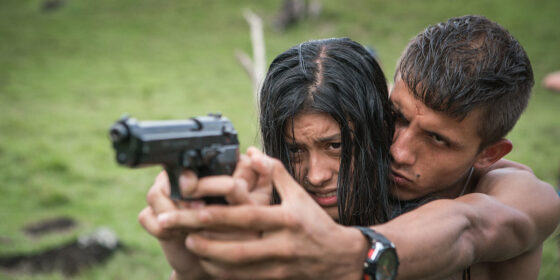 A lot of debut films have structural problems, of course, but Killing Jesus, by Colombian first-timer Laura Mora, is rather unusual in this regard. The beginning and end are exceedingly clunky, while the middle feels uniquely organic and atmospheric. Granted, this assessment has as much to do with what I as a critic appreciate in cinema as it does Killing Jesus itself. (Someone slavishly bound to the Syd Field model of narrative screenwriting might consider the second act “baggy.”) But Mora’s film is instructive of certain tendencies in debut films more broadly, and so it’s worth a closer look.

The more that Mora concentrates on setting up and/or resolving her narrative complications, the more hackneyed Killing Jesus becomes. For instance, here are a few things you can find in the first third of Killing Jesus:

– Paula sitting sullenly while her partying friends barely notice her

– Paula going drinking and dancing with said friends, to kill the pain

– Paula’s quarry, her father’s killer Jesus (Giovanny Rodríguez), telling her he knows he has seen her somewhere before…

And so forth. These are tropes we have seen time and time again. And the final act has its own share of clichés as well. (The tidying/trashing of Jesus’ apartment is a particular lowlight.)

But in between, Mora shows us about 25 free-form minutes of Paula and Jesus hanging out and riding around, with Jesus trying to suss out how he feels about this artsy college chick. Paula, meanwhile, is wavering between looking for an opportunity to kill Jesus, and trying to decide if maybe she’s wrong about him. This is the most psychologically plausible part of the film, since we, along with Paula, watch Jesus express tenderness one moment and explode in rage the next.

According to the TIFF catalogue, Killing Jesus is “semi-autobiographical,” and this explains some things about the way Mora has designed her film. What rings truest about the work is the way that it seems to rely on subjective memory and uncertainty. Killing Jesus falters when this story, at least partially drawn from life, is made to conform to narrative strictures. So in a way, Killing Jesus is an allegory for its own inexpressibility. By the end, Paula has undergone a harrowing experience, but cannot force herself toward closure.