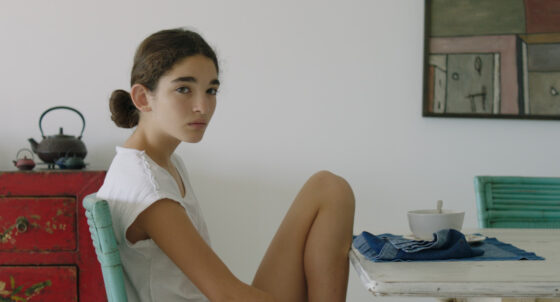 Gastón Solnicki’s third feature and first fiction film is, like its predecessors, named after a piece of music: Kékszakállú is Hungarian for “Bluebeard,” and Solnicki has cited Béla Bartók’s Bluebeard’s Castle as a key source of inspiration. The film is, however, only related to the oft-adapted folktale in the most tenuous manner possible, its primary narrative focus resting instead on a theme not dissimilar to one found in Solnicki’s familial inquest Papirosen (2011), that of generational splinter and the vertiginous drift of adulthood. Early scenes show kids leaping off (or hesitating on) diving boards while a sign that reads “CHILDREN ARE THE RESPONSIBILITY OF THEIR PARENTS” looms conspicuously. As the film progresses, kids—or, more precisely, girls, since boys play largely peripheral roles—grow up, move out, study or get jobs (or anyway try to get jobs) with varying degrees of competence.

Aspects of Kékszakállú echo the films of Solnicki’s countrywoman Lucrecia Martel: there’s a lot of listless downtime, of bourgeoisie in repose, lounging while on holiday, and only gradually and awkwardly transitioning to the adult realities of making a home, living with a dramatic reduction in domestic bustle, preparing food and getting on with a career. There’s a lot of endearingly dry comedy in this. Yet what’s stayed with me after a first viewing isn’t so much characters or narrative but, rather, the bold and sometimes theatrical compositions, the stark pageantry, and Solnicki’s frequently startling way of depicting the spaces his characters live and work in, all of which are more or less alienating—most especially those ostensibly designed for comfort. (For a film so inspired by music, Kékszakállú is hugely informed by architecture and art photography.) All of which is to say that there’s no truly comfortable place to exist in Kékszakállú, except, of course, for the theatre from which we get to watch it and behold its tumble of alluring, enigmatic images.