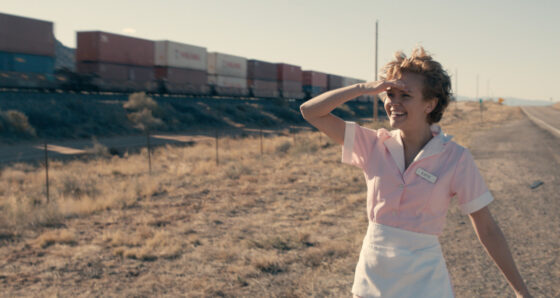 Full disclosure: I have been seeing most of this year’s Discovery titles without reading any synopses, production notes, or press packets, because I have wanted to evaluate them in as close to a tabula rasa state as possible. So I did not learn until well after seeing Katie Says Goodbye that it is the latest production from Borderline Films, the outfit responsible for Afterschool (2008), Martha Marcy May Marlene (2011), James White (2015), and a number of other recent American indie pictures. In retrospect this makes a certain perverse sense, but I probably never would have guessed. Those films, imperfect though they may be, are about recognizable human behaviour, or, to the extent that they depart from naturalism (as Antonio Campos’ Afterschool and Simon Killer [2012] do, to a substantial extent), they signal this departure with rigourous formal manoeuvring and allegorical gestures. What you see, they whisper to an attentive viewer, is not what you get.

Katie Says Goodbye, on the other hand, casts its lot with simply, folksy, down-in-the-dirt indie realism, with a dash of cutie-pie whimsy on the side. Even the banality of the title seems to wink to us, like we’re about to watch a midday Sundance Channel schedule-filler, the sort the Coen brothers parodied in Burn After Reading (2008). (“So Linda? Wanna see Coming Up Daisy or Katie Says Goodbye?”) All of this is a ruse. What Roberts has in store is more along the lines of Waitress (2007), the sweet but inconsequential final film by the late Adrienne Shelly, as “rebooted” by a sadistic Lars von Trier fan. Now keep in mind, said fan has learned nothing from Lars: not the formalism, not the philosophical inquiry, not the admittedly problematic but at least genuine concerns around gender. No, our LVT manqué just really wants to put a naïve holy-fool girl-child through the wringer because it’s fun. Oh, and let’s make sure to see those boobies.

Olivia Cooke, best known as the dying girl from both Me and Earl and… and Bates Motel, here plays Katie as a young woman whose optimism drives the plot, and her own life, into numerous ditches. Yes, she is a local waitress who makes money on the side servicing most of the guys in town. Katie has to do this because her mother (Mireille Enos) is a drunken layabout who blows the rent money on her abusive boyfriend. One day Katie sees Bruno (Christopher Abbott), the new mechanic, and decides she’s in love with him. Their pure, grunting, Neanderthal affection is destroyed when his jealous mechanic buddies break the news that Sweet Katie is the town whore.

Is the above scenario intended to be a cruel, sadistic parody of the romantic-comedy meet-cute and subsequent break-up through misunderstanding? Is Katie Says Goodbye actually one giant middle finger to Indiewood genre conventions? This interpretation might stand, and we could merely charge Roberts with failed ambition, except for some rather egregious details. For instance, when Katie agrees to a trick, she says she’ll accept a “ride home”—from a friend’s father (Nate Corddry), the local cop, and others. This is her code. But after she has told Bruno she will stop accepting sex work, she decides that she just wants a ride home from the dad (who tries to rape her) and from the two mechanics (who rape her brutally). Not only is this an “Idiot Plot,” in the classic Siskel & Ebert sense—Katie Says Goodbye would stop functioning if Katie did not do something patently stupid, essentially forgetting how language works—it creates two implausible situations in which a sex-worker protagonist is assaulted because of her own bad choices. And, after the horrific rape in the desert—which incidentally is mostly presented from the emotional point of view not of Katie but of the shy, “nice-guy” rapist (Kier Gilchrist)—Katie truly goes into her self-destructive nosedive.

Was this supposed to be a parody of art-house miserablism? A sweet nothing of a film, an Ashley Judd self-discovery picture that mutates into Dogville (2003) or Rosetta (1999) before an unsuspecting viewer could change the channel? I don’t think so. I think this is a film about a young girl, unfathomably naïve, who did things that girls who look like Olivia Cooke aren’t supposed to do, and is severely punished for it. Katie Says Goodbye is a hateful film.