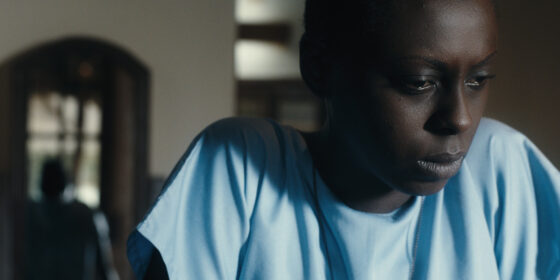 A genuinely surprising film from an unexpected source, Kati Kati is a film that draws on tradition (Nollywood, Senegalese counter-cinema, faith-based films) without falling into the stylistic or genre traps of any of those approaches. The plot is basic enough, but inventive in its execution: Kaleche (Nyokabi Gethaiga) wakes up in a hospital gown and seems to be in some sort of day camp. She is soon informed that she is dead, and so begins a parable about stranded spirits working to put unfinished business to rest so they can move on. As purgatories go, Kati Kati doesn’t seem so bad: each night you can fill an order for food, drink, and favourite media. But those problems from the past do have a way of asserting themselves, particularly for Thoma (Elsaphan Njora), the self-appointed Mr. Roarke of this Fantasy Island of Lost Souls. For the work of a first-time helmer, Kati Kati has a highly professional sheen, which is no doubt the result of the support Masya is receiving from producer Tom Tykwer and “director mentor” Pia Marais. If this is part of some sort of cultural initiative, I hope it continues, because Kati Kati is ample evidence that it’s bearing fruit.