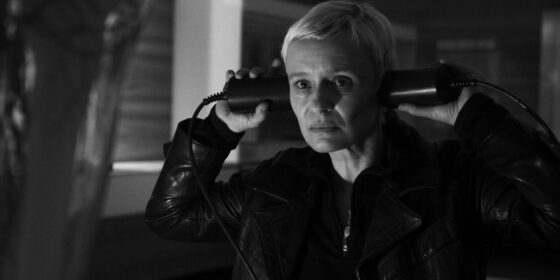 An impressive outing from the pair who made the rather shambolic Gunner Palace back in 2004, Karl Marx City is that rarest of objects: an exploration of family history that avoids solipsism and manages to connect the personal to much broader things. Petra Epperlein and her family grew up in the GDR; following her father’s 1999 suicide, Petra learns that anonymous letters accused him of working for the Stasi. This leads Epperlein and Tucker into the bowels of the massive Stasi archives, where the mountains of files, photos, microfilm, and surveillance footage, to say nothing of the shredded documents being reassembled by archival restorers (!), is literally beyond comprehension. The Stasi had multiple internal systems of taxonomy, and even the archivists admit to being baffled at times. Echoes of the NSA’s indiscriminate data collection are no doubt intentional. Who combs through this material, and what questions do they ask of it?

Karl Marx City (the name derives from that of the East German industrial town where Epperlein and her brothers grew up—it has since reverted to its pre-Communist name, Chemnitz) provides an accessible but fairly comprehensive portrait of how the Stasi functioned and, in the minds of the Stalinist bureaucrats of the GDR, why they thought they were doing what they did. The framing story regarding Petra’s father Wolfgang provides narrative shape, but it does more than this. Unlike the Soviets of the Third Reich, East Germany played on universal distrust. As one interviewee puts it, “We always said, if three people were sitting at a table, one of them is the informant.” So even though beatings, disappearances, and political incarcerations were tools of the trade, the Stasi mostly did its work in the mind, destroying families and relationships. So the possibility that the Epperleins might have lived with an intimate stranger speaks directly to the insidiousness of their methods.