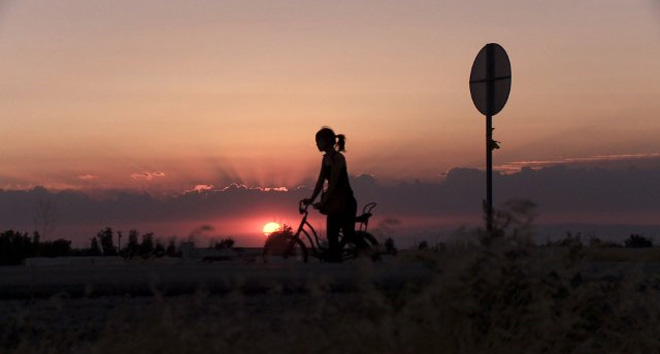 Littlerock, California is, not to put too fine a point on it, a shithole. I’ve driven through it on my way to other places, and that’s really about all you’d ever want to do. It’s located in southern central California, just south of Edwards Air Force Base, and like a lot of such towns there’s an almost deliberate lack of anything to do. Boredom, you see, makes the Armed Forces all the more appealing: enlist, see the world and whatnot. But in his highly lyrical second feature, Mike Ott turns this idea on its head: what if “the world” comes to you?

In the past decade, so much has been written about the alleged resurgence in American independent cinema that the very idea has moved beyond mere cliché and become a kind of critical contact high. Because of the recent emergence of a few very unique and compelling film artists, festivals and magazines have taken the opportunity to pay undue attention to the middling-to-pedestrian efforts of others and call it a trend. “New Realism?” Is anyone seriously going to be watching films like Chop Shop (2007), Sugar (2008) or The Puffy Chair (2005) in ten years? (Is anyone watching Our Song [2000] or Raising Victor Vargas [2002] now?) It seems to me that the critical question is whether or not a piece of cinema successfully constructs, not just depicts or conveys, a sense of place.

“Littlerock,” the collection of hotel room parties, overgrown lawns and porches, overpasses and sub-suburban voids that Ott has soldered together to form his titular film, is more than just another American teenage wasteland, faithfully reproduced in its one-more-kegger desolation. (For that kind of uninflected fidelity, consult Laurel Nakadate’s not-unworthy The Wolf Knife [2010], or such later Larry Clark efforts as Ken Park [2002] or Wassup Rockers [2005].) Instead, Ott has fashioned his Littlerock, CA, into a peculiar space of deadpan tragicomedy. This has everything to do with Littlerock’s transnational scope. The film is about two Japanese siblings on a road trip—older brother Rintaro (Rintaro Sawamoto) and younger sister Atsuko (Atsuko Okatsuka, who co-wrote the screenplay)—who become waylaid when their rental car breaks down. (Their itinerary has them going to Los Angeles and Manzanar, CA, a destination which Ott realizes will either ring a bell with viewers or not.) While waiting for a replacement vehicle, the two travellers get a room at the area’s only motel. Rintaro’s English is functional; Atsuko speaks none at all. So when the partiers in the next room make it impossible for the pair to sleep, it befalls the rather more straitlaced brother to go over and ask them to keep it down. Before long, both Rintaro and Atsuko are downing watery domestics at the party, where the comely Atsuko is turning heads.

Although this sounds ripe with Jarmuschian potential, Littlerock has a slightly different m.o. It’s at this point that Ott and Okatsuka unleash their cosmic middle American joke in the form of Cory (Cory Zacharia), the dweeby pseudo-sophisticated teen who gloms onto the pair of visitors and will not let go. Somehow perceiving in their foreignness a couple of kindred spirits, while simultaneously thinking he’s protecting them from fetishization by his fellow yokels, Cory is, quite simply, a piece of work. Utterly effeminate but thoroughly heterosexual, convinced that the guys who mercilessly abuse him are his friends, and willing to perform his “model walk” at the drop of a hat—Cory’s constipated fierce-face makes Zoolander look like Tyrese Gibson—this character is one seldom seen in American film, probably because he’s the paragon of so many creative individuals’ fears. If you don’t grow up in a certain class, or if good taste is something you had to figure out on your own, you’re always worried that you haven’t entirely squelched the Cory within, and that disaster is but one missed social cue away.

Littlerock doesn’t go easy on Cory, but it treats him with a genuine tenderness as well. Ott is a filmmaker who operates on the level of short story, and Littlerock is not novelistic in its ambition. Rather than silly “fish out of water” or “culture clash” manoeuvres, Ott orchestrates very private moments in which the language divide only extends the emotional utility that strangers provide us as they serve as blank slates for our pressing needs of the moment. Littlerock isn’t a film weighed down by symbolism, and to misconstrue it as such would divert us from its small, idiosyncratic pleasures. Still, it doesn’t seem incorrect to think of Cory, more than the other, more confident young people of Littlerock, as emblematizing American cluelessness, the aggression and culpability that comes (to paraphrase a former leader) from misoverestimating yourself.

As for Rintaro and Atsuko, they both have very different takes on what they encounter in Littlerock. Once the new rental car comes through, he’s ready to press on, satisfied that he’s taken in about as much of the local culture as he requires. (One doubts Rintaro will be showing his pals back in Japan how to shotgun Sapporos.) Atsuko, meanwhile, has begun responding to the attentions of Jordan (Brett Tinnes), despite the language barrier, and wants a few extra days to see how it pans out. Cory, for his part, installs himself as a persistent third wheel. Were he not so doggedly guileless, you’d think he was angling to cockblock Jordan the operator. Even when Cory proclaims his desire for Atsuko, in an eruption just slightly less disturbing than Eddie Marsan’s in Happy-Go-Lucky (2008), his side of the love triangle still feels like a makeshift lean-to.

So, peopled as it is by all these stoners and wackjobs, why does Littlerock exert such a pull? The film’s final reel, which takes viewers by surprise if Ott’s clues about history and geography don’t register, increase the stakes of all we and the siblings have witnessed. (This revelation is delivered with an elegance that reminded me of Raymond Carver.) Despite the initial curiosity that led him to crack open that first beer, Rintaro doesn’t understand why Atsuko wants to spend more time with these people she’s just met, who in his words “don’t work, just drink and sit around.” If this might’ve been his own destiny, he obviously feels like he dodged a bullet.

Atsuko, on the other hand, perhaps because she is younger and going through other changes and self-discoveries, is clearly more enamoured, not of Littlerock per se, nor of Cory, but of this alternate world, this other self she might have been had history and racism not intervened. But of course, that other present is forever inaccessible. As Ott demonstrates in the final shot of Atsuko and Cory speaking right alongside one another on the same telephone line, sometimes the past really is gone, even as we seem to be living it.