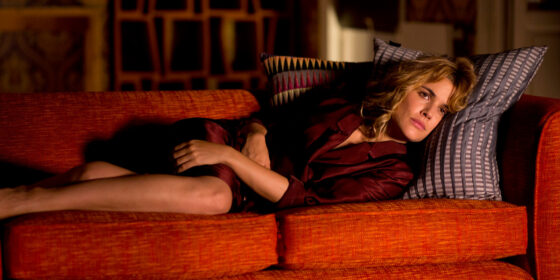 A melodrama draped in reds and blues, Almodóvar’s 20th feature spans decades and geography to spin a mother-daughter love story populated by sickly women, meddlesome housekeepers, and virile but inconstant men. Bobbing in the heart of this tempest is the eponymous madrileña whose only child, Antía, went to some spiritual retreat in the Pyrenees ten years ago, when she was 18, and never returned. Alternately embodied by Emma Suárez (in middle age) and Adriana Ugarte (in young adulthood), long-grieving Julieta is set to finally abandon her vigil and start a new life in Portugal, when she runs into someone who has just seen Antía. Thus Julieta’s desperate hope for reunion is suddenly renewed, prompting much letter-writing and flashbacks to a life largely dictated by chance.

Julieta is based on a brilliant trio of stories from Alice Munro’s Runaway which, read in sequence, possesses the density and entrancing biographical sweep of a novella. Almodóvar’s adaptation is surprisingly faithful to Munro’s plotting, though less so to her themes—and to her tone, not at all. It’s this dissonance that’s somewhat problematic: narrative compression and the impetus to escalate tension through red herrings and Alberto Iglesias’ overcooked score drive Julieta toward a climax and catharsis that never quite arrive.

Still, Julieta works on you, slowly. (And fittingly: this is a movie about the long-term effects of absence.) Antía’s inexplicable vanishing summons harrowing questions about emotional inheritance and guilt. The moments Julieta selects from her past for scrutiny betray a reliance on magical thinking to make sense of what is inherently senseless, to impose causality on events that would otherwise seem random: the suicide of a stranger on a train or the coinciding of marital turmoil and bad weather. Let Julieta sit with you a while: it makes up in long-term resonance what it lacks in immediate closure.