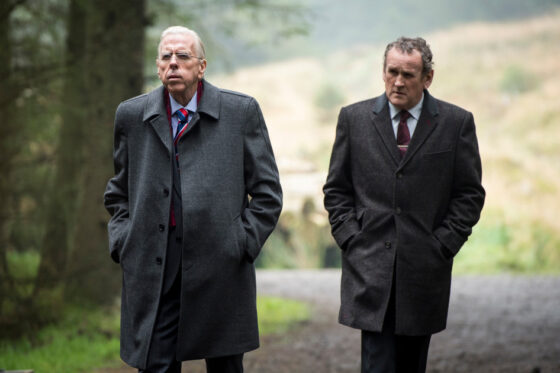 “Politics is a long game,” remarks Sinn Féin MP Martin McGuinness (Colm Meaney) near the beginning of The Journey, and for the two main characters of the film—McGuiness and Democratic Unionist Party leader Ian Paisley (Timothy Spall)—it is a game deeply embedded in nationalist and religious fervour. The film is based on the historic peace talks in Scotland in 2006 between the leaders of the two major opposing forces in Northern Ireland, resulting in the St. Andrews Agreement and the appointment of Paisley and McGuiness as joint heads of the Executive Office. While a private discussion between the two men ostensibly did take place at the time, the conversation that constitutes the bulk of the film is the invention of director Nick Hamm and screenwriter and crime novelist Colin Bateman. To his credit, Hamm allows this discourse to take center stage, and Bateman skillfully shapes the wordplay between the two enemies into a symbolic and dramatic narrative. The film references the facts of the Troubles, but primarily pursues the question of why—after 40 years of conflict, hatred, and recrimination—are they able to find compromise and cooperation at this particular moment?

The two adversaries, forced by political exigency to journey together, end up taking the road less travelled when their driver, a young MI5 agent, takes a shortcut through a woods where they hit a buck, take a walk, and face off about religion in a crumbling church. Their situation serves as a launching ground for political soul-searching, most metaphorically prompted by the church’s still-vibrant stained glass windows depicting Protestants from Foxe’s Book of Martyrs. Although the film gives equal time and consideration to the two camps, it seems hard to make Paisley—a fire-and-brimstone minister and politician lacking both humour or humility—sympathetic. Even at his most likeable, the film highlights a parallel he would be unable to recognize, as he never watches movies: his fervent Biblical tirade against a petrol-station attendant recalls Samuel L. Jackson’s “tyranny of evil men” monologue from Pulp Fiction (1994). (This is no accident, as Jackson has served to differentiate the views of the two earlier in the conversation.) In contrast to Paisley’s repressive Protestantism, McGuinness’ more tolerant Catholicism comes across as staunchly humanist: unlike Paisley, he is not interested in a vanished British past, but embraces the constantly evolving present with good humour and obvious pleasure.

The film plays the two against each other in ways both funny and raw, exploring different possibilities for a common ground that they clearly found in real life: they share stringent personalities and righteous anger and bond over linguistic tics (so they do). But it is ultimately a shared understanding of deep political necessity that unites them most powerfully. Batemen embodies the mystical process whereby their hatred softens towards friendship through their discussion of Reformation narratives of martyrdom. The two men finally agree on contemporary politics via religious icons: they realize they must become martyrs for the same cause. They must betray their tribes, their principles, and their pasts in order to forge a peace for the future, which is the way of all nation-building: sacrificing individuals for a greater good.