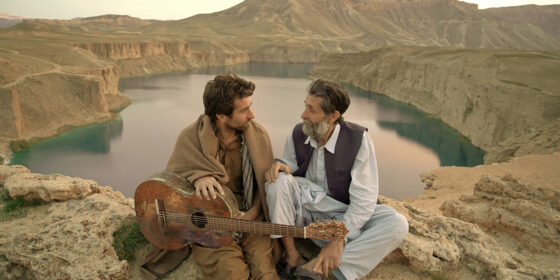 An MFA-level piece of short fiction with decidedly honourable intent, Jirga seems blinkered by its Western point of view despite its dogged efforts to leave said perspective behind. Mike (Sam Smith) has returned to Afghanistan where, three years prior, he accidentally killed a civilian during an anti-Taliban raid. He wants to make some form of restitution with the family and subject himself to the justice that he feels he deserves. (As a title card informs us, a jirga is a traditional tribal adjudication process.) But the film, intended as a parable of forgiveness, falls into a number of familiar traps.

For the first half of Jirga, Afghanis are shown swarming in the streets of Kabul, unsubtitled and shot in a bulging fisheye lens, all to make them exaggeratedly “foreign” and disorienting in their own land. Once Mike pairs off with an individual driver who agrees to take him south toward Jalalabad, a buddy-picture vibe emerges, showing that these rugged Arabs really are gentle souls after all (they even play music together). This sets the stage for Mike’s capture and eventual engagement with Taliban (one of whom helpfully speaks English), and finally the southern tribal villagers who decide his fate.

Actually shot in Pakistan and Afghanistan, with some performers who themselves are former Taliban, there is an undeniable power to Jirga. Director Benjamin Gilmour makes full use of the mountainous landscape and the visages of his non-professional Afghan actors, and it is difficult not to succumb to the humanist fantasy of Mike’s quest for redemption for sins that so many of us indirectly share. But a cursory step back reminds us that Jirga would not pass muster in the court of basic plausibility.