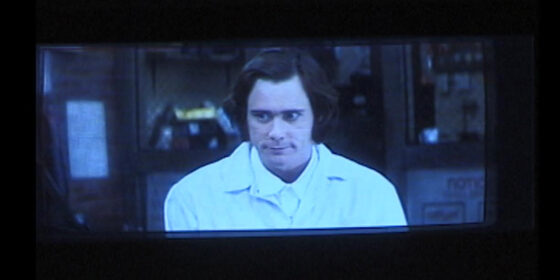 When Jim Carrey auditioned to play Andy Kaufman in Miloš Forman’s 1999 biopic Man on the Moon, he was a man on a roll: Ace Ventura, The Mask, and Dumb and Dumber (all released in 1994) had made him a star and the best-paid comic actor of his generation, and he exceeded himself in The Truman Show by delivering one of the finest and most fully rounded performances of his career. Determined to nail the part of Kaufman no matter what, the Canadian-born actor devoted body and soul to channelling the legendary American comedian. Unfortunately, as Chris Smith’s documentary shows, not everyone on the set of Forman’s film—including the baffled director and his co-stars—appreciated Carrey’s deep-Method approach to his role.

Based on previously locked-away making-of footage filmed by Kaufman’s former girlfriend Lynne Margulies and the comic’s longtime writing partner Bob Zmuda, Jim & Andy: The Great Beyond is, to a large extent, a straightforward behind-the-scenes retelling of what exactly happened during that shoot of Man on the Moon, which saw one great comic actor step way out of his comfort zone in order to lose himself in the conflicted mind of another, with all the collateral damage that comes with such a venture. In Kaufman’s case, disaster emerges naturally in the form of Tony Clifton, the artist’s most obnoxious alter ego, who turns up on set asking for trouble, arguing, crashing cars and getting hammered as he pleases. But Smith, in his first full-length documentary since Collapse (2009), is clever enough not to let chaos take the reins yet again: he balances the increasingly wild and bewildering archival material with a present-day conversation with Carrey at his most calm and relaxed, and it’s the combination of these two opposing forces that ultimately make the film work.