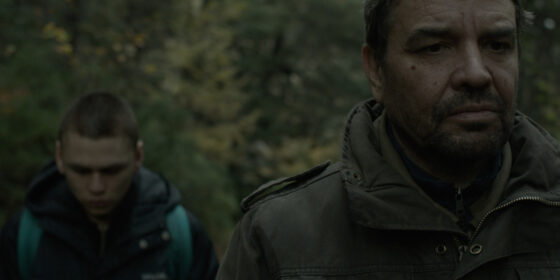 Dear Jesús, are we not yet tired of uninspired coming-of-age movies?  This one is of the Chilean variety (supported by a massive co-production effort), telling the tale of the eponymous troubled high school senior (Nicolás Durán) who falls in with the wrong crowd and clashes with his widowed father Héctor (Alejandro Goic). Both father and son are drifting apart, still reeling in the wake of their wife/mother’s death. Jesús struggles to keep up in school, preferring the company of his group of bad-boy friends, who ditch responsibilities for underage drinking, huffing toxic substances, various feats of masculine one-upsmanship, and K-Pop (the film opens with a strobing sequence in which the youthful cadre compete in a sort of K-Battle of the Bands).

Predictably, Jesús gets in too deep with his pals ’displays of boyish bravado, and consequently his already strained relationship with his father is tested even further. Suddenly switching the film’s POV from Jesús to his father, director Fernando Guzzoni attempts to articulate the complications of a parent loving a less-than-perfect child, but the emotional development of their relationship is so shallow that not even pinning the film with a shock ending can save it. It’s a shame, as there is a sequence in the middle of the film that momentarily promises a more engaging vision of exuberant teenage spontaneity: a moment of sexually explicit experimentation between Jesús and a male friend that’s equal parts sweet, titillating, bewildering and comforting. It’s a welcome respite from the clichés that bookend it.