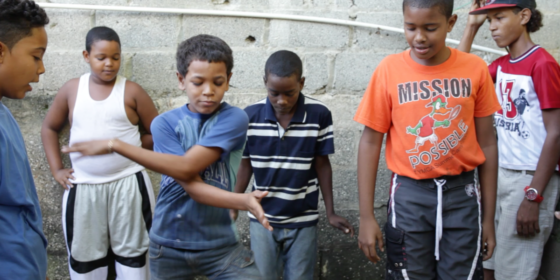 From its aerial opening shots of the massive urban crunch of Santo Domingo, zeroing in on one particular family in a corner of the slums, Jeffrey looks at first as if it’s going to provide a Dominican riff on City of God (2002). Thankfully, first-timer Yanillys Perez foregoes most of the clichés we’ve come to expect when cinema shines a light on the two-thirds world. She’s after something much more poetic and even lighthearted at times: a portrait of a 12-year-old boy navigating the only world he knows. Joselito de la Cruz, known to all by his Anglicized nickname “Jeffrey,” is a bright, hard-working kid, one of a family of nine, helping to support his ailing mother by cleaning windshields at a busy intersection. He and his older brother Jeyson are seriously into hip-hop dancing and reggaeton, and Jeffrey decides to cut his own track and try to break into the local scene.

For the first half of Jeffrey, Perez provides us with a running voiceover in which our lead character not only provides basic information but shares his private thoughts. While voiceover is frequently the bane of nonfiction cinema, here it creates a kind of poetic counterpoint, seeing the somewhat conventional images of deprivation recontextualized by Jeffrey’s hopeful but realistic perspective. There are hints of early Kiarostami, or the great, underseen Little Fugitive (1953) in these early passages, as Perez abjures broader documentation in favour of portraiture and psychological insight. Sadly, the second half of the film drops most of these unique elements. Instead, Jeffrey chronicles the boy’s sincere pursuit of music as a way out of poverty, and at this point Perez reverts to the point-and-shoot reflexes that characterize the vast majority of independent documentaries. While it’s true that Jeffrey is a charismatic subject, Jeffrey the film is far more engaging when the young man is one element among many in a richer formal stew.