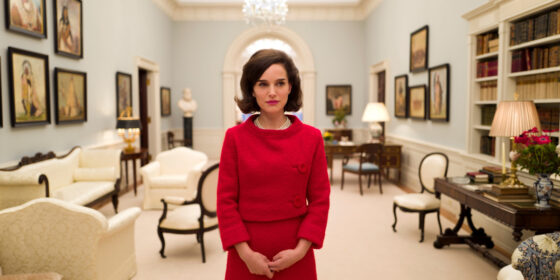 In his first English-language production, second unconventional biopic of the year (after Neruda), and third impressive film since February 2015, Chilean auteur Pablo Larraín keeps racking up successes. He hits the ground running in Jackie by prefacing the opening shot with the strange, self-collapsing flute-and-violin notes that will accompany his portrayal of the First Lady in the aftermath of Kennedy’s assassination. Mica Levi’s theme—like Natalie Portman’s compellingly affected accent, and like Jackie’s entire structure—is discordant, alienating, and absolutely irresistible.

Scenes of Jacqueline’s horrifying endeavour cover anything from the President’s death in Dallas (this one less extensively than you’d perhaps think; Larraín needs only a terrific tracking shot of the limousine speeding away and a glimpse of the fatal hit) to the funeral and subsequent move from the White House, but they’re scattered across the film and framed by two conversations: one with The Journalist (Billy Crudup), the other with The Priest (John Hurt), in a sort of rational and spiritual assessment of her past and future.

Portman’s most complex character since Black Swan is as concerned about her own future as she is about her husband’s legacy. Linking the two is a motif that subtly turns Jackie into a film about places: places in history, places to rest, places you’ve created and must now leave, places you’ll move to, even though “nothing’s ever mine.” In the First Lady’s words, things and artifacts last far longer than people, which is why we see her discussing furniture purchases in a faux-archival footage reproduction of her “Tour of the White House” TV special. The relics of American history she brought in will end up in boxes, perhaps sold to ensure the future of her children. Her fascination with Lincoln betrays a desire to make legendary figures descend on reality, while at the same time setting the stage for her real husband to join the ranks of legends.

It’s powerful stuff, woven carefully into the fabric of Noah Oppenheim’s excellent, measured screenplay. And yet Jackie lives and dies by Larraín’s extreme close-ups of his protagonist, especially in the handheld, agitated shots aboard Air Force One following the assassination. Grief blends with a fierce survival instinct in her search for legitimization. She wants everything out in the open, from her bloodstained dress to her children’s confused looks. By contrast, she’s calm and collected during the interview—as is Larraín’s composition—playing cat and mouse with Crudup and tiptoeing across the line of what’s true and what’s public. In this respect, it’s easy to recognize some of the shared elements between Jackie and Neruda. But it’s still striking to see Larraín tackle such quintessentially American material (and with a largely different crew) and managing to hit the mark so cleanly once again.