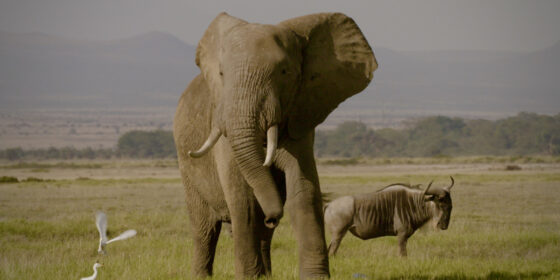 A “call to action,” a “wake-up call”—call it what call you will, The Ivory Game is stylized broadcast journalism for the Netflix set, which isn’t necessarily a bad thing, considering how smart elephants are; if only they can outlast cinema when it comes to extinction.

To be fair, the ivory trade is a rapacious racket, and good on the conscionable protectors featured herein, who act as protagonists in a drama ready-made for stark moralization. The crisis of poaching does not call for ethical equivocation, but the film’s pedantic approach takes for granted the late-capitalist phenomenon in which outrage and material seduction are no longer necessarily mutually forbidding (in this sense, perhaps the adoption of a more perverse approach of structurally siding with the enemy, à la Joshua Oppenheimer, may have proven more effective; who, exactly, is so savouring their ivory that an elephant’s life could be justifiably sacrificed?).

Still, we’re treated to aerial shots of the bush, where once the noble beasts did thrive are now reduced to rotting carcasses in the wake of slaughter. A conservationist leads a stronghold against poachers in Kenya and Tanzania, where a manhunt for the Bin Laden of poachers ensues (replete with night-vision footage). In China, where a robust market fuels the illicit trade, a native (and therefore unsuspected) activist goes undercover to sting dealers who shamelessly boast of their inventory. “It’s very dangerous” he informs us of his mission, potentially absolving the film of its obligation to demonstrate this beyond mere dramatic tropes.

It doesn’t take an ethnography lab to unpack the vested power of a tusk, but perhaps a more rigorous empiricism (e.g., Farocki), while compromising box-office appeal, could better serve a more enduring agenda, fostering a retention of concern that ensures that tomorrow’s elephants aren’t just yesterday’s whales.