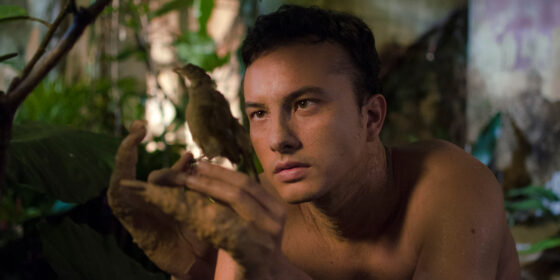 The supernaturally-inflected police procedural is a subgenre with international traction (as evidenced by the recent success of The Wailing), but while there’s surely something trendy about Malaysian director Dain Iskandar Said’s new thriller, it draws on local culture in a way that suggests its inspirations predate and supersede True Detective. Said shows his pretensions a bit by naming his two protagonists, a photographer and a police detective, Adam and Man—and the fact that Adam’s next-door neighbour is a beauty named Iva neatly completes the Biblical trifecta. What’s provocative here is the equation of photography with (Original?) sin: the creation of images is a running visual and metaphorical motif, and the mystery of why there seem to be vintage snapshots of Iva strewn amidst the carnage of a serial-killing spree works up a passable feeling of Vertigo as it builds and deepens. The filmmaking is clean and speedy, with enough memorably surreal images (including some inventive transformation effects that meld make-up and CGI) to support the increasing strangeness of the plot, which eventually and energetically throws reality-fantasy ambiguity to the wind. Although things are never quite as frightening as they’re meant to be, Interchange resonates with an earnest, cunning desire to spook and entertain.