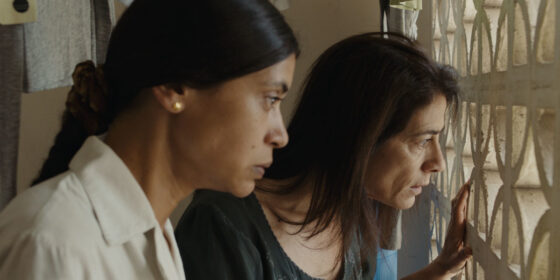 A film so phony that its makers needed to coin a nonsense word to give it an appropriate title, the irksome Insyriated is the sort of feeble attempt at profundity that crops up in the face of every armed conflict. It’s based on the notion that in extreme circumstances, people show you what they’re really made of, a concept that is certainly in need of some interrogation. (Everyone fancies him or herself a hero, but most people are never tested.) In this case, the great Hiam Abbass is the matriarch of a large family in Damascus, trying to survive the civil war by hiding out in their apartment. They have given shelter to a young couple from the building, and at a critical juncture the family closes ranks and sacrifices the neighbour woman (Diamand Abou Abboud) and her baby to the metaphorical wolves.

Among Belgian director Van Leeuw’s numerous sins is a brutal, almost lascivious depiction of violence against women, something he clearly believes is excusable because, you know, War is Hell and all that. But when placed alongside his bits of literary parallelism, or the first-reel lapses in judgment that create third-act explosions of fury, one cannot shake the sense that the human tragedy of Syria is mostly a pretext for Van Leeuw, a place for him to hang his liberal bromides and pat moral lessons. The main takeaway here: those Asghar Farhadi chamber dramas are a lot harder than they look.