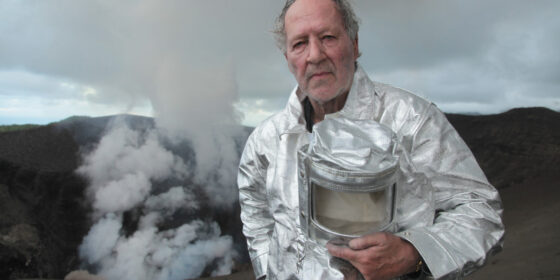 Like certain kinds of sports fans, those who are into volcanoes can’t understand those who aren’t. (I’ve met a few, and I’ve found little else in life to discuss with them.) So Into the Inferno, Werner Herzog’s third film addressing volcanoes, and the first taking a global perspective, is not for those people. Herzog doesn’t need to explain his own fascination as far as we’re concerned, but when he does, his narration expresses an essential truth: Volcanoes are the most dramatic reminder that the Earth is a constantly moving, shifting, unstable thing, always on the verge of eruption, always cracking, changing, drifting. L’avventura (1960), the quintessential film of drift and change, ends with a shot of a volcano.

Although he could have—and, oh, it would’ve been fun—pulled in such examples and uses of movie volcanoes to elucidate his views, Herzog decided to be guided by his collaborator (credited as co-director), University of Cambridge volcanologist Clive Oppenheimer. Cameras track Oppenheimer around the world as he studies the geology as well as the indigenous human cultures existing near volcanoes in the Vanuatu Archipelago in the South Pacific, Erta Ale volcano in Ethiopia, iconic Mt. Paektu in North Korea (the one problem segment, turning into a mini-doc on the North Korean state), and Iceland’s massive chain of volatile fissures and mountains.

Herzog has had his own drift in his recent non-fiction after Grizzly Man (2005), toward documentaries with a National Geographic tinge about them. The wild, near-suicidal extremes of his first volcano movie, La Soufriere (1976), have been replaced by a steadier, more “educational” attitude, though one still informed by Herzog’s obsession with the mystical, bizarre and unseen. He’s interested in how the measurements of science can align, or at least have a conversation, with ancient beliefs in spirits, and Oppenheimer is very good and respectful about engaging in dialogues with such believers, like Vanuatu village chief Mael Moses, whose ancestors were cannibals.

Besides the four volcanic spots, a fifth element makes Into the Inferno much better to view on a cinema screen than on the smaller screen via Netflix, which releases the film in late October. This is Herzog’s inclusion of footage from the field documentary film shot by the late French husband-and-wife volcanologist team of Katia and Maurice Krafft, who died shooting on Japan’s Mt. Unzen in 1991. The Kraffts outdid Herzog at his own game of extreme non-fiction cinema, walking and filming in dangerous but deliriously visual proximity to erupting fissures and molten-hot lava flows, producing images of the sort of mesmerizing, otherworldly strangeness that is often described as “Herzogian.” They died doing this, and by Herzog including their footage, he is making a humble gesture of honour.