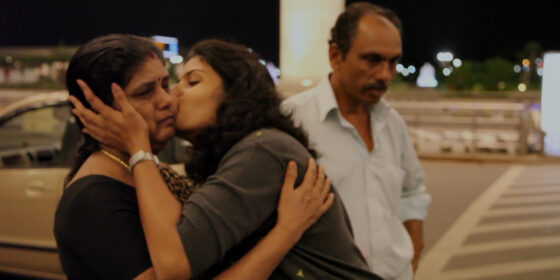 Never mind the city symphony—here is the cacophony of an entire country. The “user-generated doc” is enlisted to reveal (or effectively colonize, depending on your view) its own vast territory, in this case the world’s largest democracy, India. By virtue of sheer plurality and simultaneity—and under the dubious tutelage of Ridley Scott and, get this, Google—India in a Day attempts to chronicle life in India on a single day (October 10, 2015), whereupon thousands of Indians filmed their daily lives and promptly uploaded the results for an editorially finessed product by Richie Mehta. As autonomous shorts, there is plenty to behold in the way of small gesture: a non-discriminating pedicab driver who offers rides to people of all faiths; schoolboys who leave their studies to become manual labourers; a restaurant serving the best roti around that is run entirely by transgender chefs; a woman resting in a drab stairwell, wondering if her life choices have made her happy (or if it’s the whiskey talking). Revelations, all, were it not for the ad nauseam nature of the cumulative project, in which the incidental is subsumed by the totalizing effect of a panorama. No less-than-precious detail is allowed to rest for a moment in a state of temporal poise, as the succession of images must be moved along like a YouTube montage, scored to a saccharinely buoyant soundtrack that glazes the quotidian for posterity. One is reminded of Roland Barthes’ critique of the “Family of Man” exhibition, in which, despite all differences and historical conflicts among people, the final subject is an incontestable “human nature,” to be lyricized by a central, organizing conceit. This, he was keen to point out, is an easy alibi.