In the Long Run: The Robber 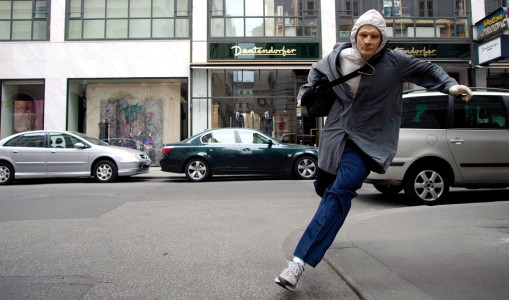 If I were a betting man, I’d have put everything I had on Thomas Arslan’s In the Shadows (ably parsed by Christoph Huber in Cinema Scope 45) as breaking out from the German-language fare at last year’s Berlinale. In addition to being sharp, rigorous, and, to quote Charlie Kaufman’s mom, psychologically taut, In the Shadows owed much more to the classics of the crime genre, and owed it with such dry, almost scholarly wit. This, I thought, was a film that had crossover written all over it. By contrast, Benjamin Heisenberg’s The Robber, a film that is equally accomplished in most every respect, seemed far too knotty and unheimlich, a formalist effort geared mostly to the initiated.

Heisenberg’s debut film Sleeper (2005) premiered at Cannes to mostly positive notices, and it too operates within an inward-folding register. The filmmaker takes what could have been a thriller plot (a young university scientist is asked to monitor his Algerian colleague, who may or may not be a terrorist) and simmers it down to a densely concentrated character study.  The Robber makes Sleeper looks luxuriously novelistic by comparison. Following its competition slot in Berlin, Heisenberg’s latest was a surprise selection for the New York Film Festival, which refocused attention on the film, helping it achieve the commercial release that has eluded most films associated with the so-called Berlin School (including In the Shadows).

But, it should be noted, Heisenberg’s film is equally Austrian in provenance, co-produced by avant-documentarian Nikolaus Geyrhalter (Our Daily Bread [2005]). It’s an adaptation of Martin Prinz’s novel of the same name (Prinz co-wrote the script with Heisenberg), a fictionalization, based on available fact, of the career of Johann Kastenberger, a bank robber active in Vienna through the mid-to-late ‘80s. However, it’s not a heist movie, and certainly not a biopic. The Robber is a precise, unsentimental inquiry into labour and movement. It’s about the alternation between different forms of bodily activity and the figure they cut in space, the strange orbit generated by a man who functions less like a human being than a phenomenological event.

That man is Johann Rettenberger, played by Andreas Lust, who was most recently seen by North American audiences in Götz Spielmann’s Revanche (2006). We first see Rettenberger running in a tight circle around the prison yard in a gray hoodie, then taking his pulse. Back in his cell, we see that he has a rather impressive cross-training set-up for an inmate: a row of track shoes and a near-gym-level treadmill. We soon learn the vital facts about Rettenberger: that he is about to be paroled after doing six years for armed robbery, and that he has been maintaining his training as a runner during this time, seemingly to the exclusion of all other pursuits. Almost immediately upon release, Johann is seen pulling off a one-man bank heist in what we will come to recognize as his signature style. Suburban branch location, pump rifle, rubber Ronald Reagan mask, and no real violence: just a high speed rip-and-run.

Almost incidentally, Rettenberger’s next major move following his parole involves entering the Vienna Marathon, where he is seen (through television coverage) breaking from the amateur pack and setting a new Austrian record. The news media later note that this mystery man is in fact an ex-con, which makes Rettenberger’s victory an apparent human-interest story. But what all of this immediately shows, through Lust’s chiseled, Bresson-bomb performance and Heisenberg’s organization of the film’s lengthy, self-contained sequences, is that there is not exactly a human there in which we, or those around Rettenberger, can take an interest—at least not in any conventional sense. We see this fairly quickly in Rettenberger’s dead-eyed conversations with his unctuous parole officer (Markus Schleinzer), whose solicitations will eventually lead to one of Johann’s only unpremeditated expenditures of adrenaline. Even Johann’s “love interest,” Erika (Franziska Weisz), a connection from before his incarceration, seems somehow vestigial in his life, more of a test case for his own possible human capabilities than a successful exercise of same.

But lots of films have soulless protagonists; what Heisenberg and Lust actually accomplish formally is far more interesting. As mentioned, The Robber, for the most part, unfurls in extended sequences, and they tend to operate at dialectical right angles to one another. We have Rettenberger the runner, and then Rettenberger the robber, and sometimes these functions—I would stop well short of calling them identities—butt up against each other, so that we see (for example) Johann’s isolated cross-training and steady, horizontal pace shattered against the jagged, contrapuntal description of space and fractured temporal haze that characterizes his heists. Three times, Johann blasts the radio in the cars he’s stolen following the robberies, giving The Robber its only real moments of sonic juice.

What’s more, the most formally convoluted section of The Robber (and its most compelling) comes at the 40-minute mark, when this athlete/criminal division breaks down entirely. The second of two back-to-back bank robbery sequences ends in Johann’s dodgiest getaway, with police cornering him in a parking garage. He essentially must scale the whole structure and then race down the stairs again, eventually wending his way through a hotel kitchen. This breakdown in Rettenberger’s and the film’s discipline sends the man into a literal spiral, the long distance runner forced into an obstacle course bordering on parkour.

This overall orchestration of The Robber as a kind of cinematic device for marking contrastive states of existence is, crucially, mirrored in Rettenberger’s own formalistic attitude towards his own existence. He stows away the money he steals, never really caring to do anything with it. But more significantly, Rettenberger always wears his runner’s pulse rate calculator on his wrist.  We see him shortly after a training run heading back to the room in Erika’s apartment where he’s staying, taking off the pulse watch, and plugging it into his desktop for a waveform reading. We see the fluctuations in Johann’s heart rate from his runs, but more importantly, the midday spike representing the bank robbery. And so, in a very real sense, crime for Johann is a physical high.

Heisenberg displays this through a character, and a cinematic method, that is primarily structuralist: the “runner’s high” as a waveform and a difference of intensity, rather than personal euphoria. This clinical stance takes physio-chemical states of the body far more seriously than the cliché of criminality-as-sex that we’ve seen represented time and again in modern crime fiction (The Honeymoon Killers [1969]; Kalifornia [1993]; Natural Born Killers [1994]; Les amants criminels [1999]; even Badlands [1973]). What’s more, Heisenberg’s method underscores objectivity by emphasizing the space(s) around Rettenberger, rather than the “man inside.” The Robber may keep Rettenberger the Lust-object front and centre, but only as the anchor around which landscapes and cityscapes move, shift, and articulate themselves. (As with so many current German films, including In the Shadows, cinematographer Reinhold Vorschneider is the MVP here.)

In a typical scenario, drawn from film noir’s collapse of the rugged Romantic humanist, we’d expect Rettenberger to be running away from himself, or towards some unattainable Lacanian goal, struggling to fill some primal lack. But Heisenberg is light years away from Godard, Melville or Wenders. Even In the Shadows’ relatively blank Trojan coalesces as a set of noirish tropes, imbued with purpose by Arslan’s cinematic breath of life. But Johann’s fitful athleticism belies a strange passivity, a man for whom propulsion has replaced Being-unto-Death. The depiction of Johann’s death mirrors the details of Kastenberger’s quite closely, but The Robber pulls back to provide a still space, a vacuum where introspection should be, may be, but does not necessarily rush in. When Rettenberger’s race finally comes to an end, it seems he’s been running on empty for a very long time.