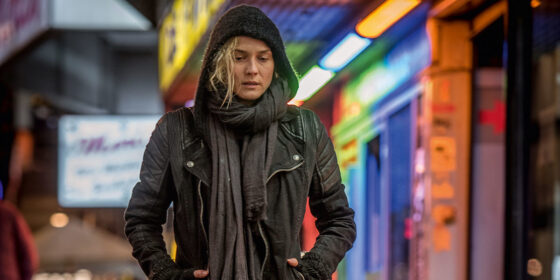 Directed by one of the world’s most heavy-handed directors, In the Fade is nothing if not unremittingly topical. The ultra-schematic plot foregrounds evil neo-Nazis with a yen for terrorism, victimized Kurds, and one kick-ass wreaker of vengeance played with great flair by Diane Kruger, who won the Best Actress prize at Cannes last May. Once the schematic plot is launched, the outcome is predetermined—or should one say overdetermined? Early in the film, the laid-back domestic bliss of Katja (Kruger) is shattered when she returns to her Hamburg home to find that her drug dealer and ex-jailbird husband Nuri (Numan Acar) has been killed by a terrorist bomb. This life-changing event triggers Katja’s search for the perpetrators; her triumphant victory over her racist nemeses is all too predictable, and might as well have been torn from the pages of a failed superheroine comic book. The courtroom sequences chronicling the trial of the murderers are, if anything, even more ponderous.

Akin is a director who gives political thrillers a bad name; compared to the manipulative stratagems of In the Fade, Costa-Gavras’ films, once derided by Cahiers critics as shamelessly manipulative, look positively subtle. Yet as long as festival selection committees go on including films like In the Fade in their rosters and a certain segment of the public remains conned (the film was recently selected as Germany’s candidate for Best Foreign Language Film at the Oscars), Akin will continue to churn out more of these self-important turkeys.