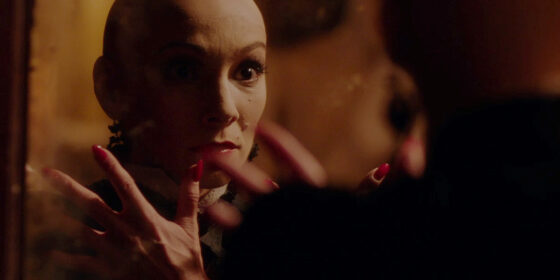 I’ve remarked elsewhere in Cinema Scope’s TIFF coverage (specifically regarding Paolo Sorrentino’s Loro) that one of the manifestations of our current state of Late Auteurism is filmmakers who believe their own press and think that they’re actually “authors” will copy earlier and greater masters. In art, imitation is essential: true originality is as mythic as the notion that directors in an industrial system involving dozens if not hundreds of artistic collaborators are authors in the same sense as novelists, poets, painters, composers and so on are authors. There’s a difference, though, between imitation and merely replaying to fill in the empty spaces in your own work, which is the case with Sorrentino. This fine line is visible in what will probably turn out to be the most interesting entry in Midnight Madness, Peter Strickland’s In Fabric.

The guiding force here is Italian giallo, in spirit and form. The idea is direct: a London fashion store is operated by a cabal of characters with some direct connection to the underworld, whose main weapon of destruction is, literally, a killer red dress. The story is divided roughly in two, the first dominated by a single mom (Marianne Jean-Baptiste) who clerks at a bank with murky New Age tendencies and who makes the mistake of buying the dress. Never mind what it does to a washing machine, the dress is malignancy in the form of fabric, in which Ari Wegner’s colour-saturated cinematography luxuriates.

Strickland imitates giallo’s fascination with the possibilities of intensified colour (nothing since the early days of Technicolor quite looked like this), but it’s in the angular, rapid editing tempo (by Matyas Fekete, who has edited all of Strickland’s movies since his astonishing debut Katalin Varga [2009]) and self-conscious goofiness where In Fabric excels. Forget trying to figure out who’s who in this zoo, or even exactly why the story needs to switch direction toward a less engaging central character: this is a murder spree in the truest sense, as intentionally superficial as fashion itself, but insinuating—and displaying, in a stunning late reveal—that an alluring palace of consumerism is the ideal den for catacombs of evil.