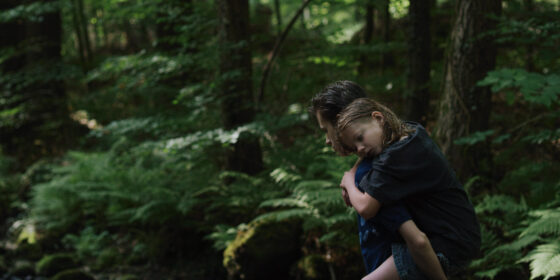 It’s outrageous that it should have taken until 2019 for Angela Schanelec to make it into the Berlinale Competition—and ironic, given that it was a review of her film Passing Summer (2001), published in Die Zeit, that originated the term “Berliner Schule.” That film landed in the festival’s Forum sidebar, as did Afternoon (2007) and Orly (2010), and it’s only Schanelec’s eighth full-length feature, I Was at Home, But…, that finally got her invited into the main slate. She went on to win the Silver Bear for Best Director, making her the latest Berlin Schooler—after Maren Ade (Everyone Else, 2009), Ulrich Köhler (Sleeping Sickness, 2011), and Christian Petzold (Barbara, 2012)—to nab a silver statuette from a festival that has always had a fraught relationship with the group.

Schanelec herself has never been particularly enthusiastic about her inclusion as part of the Berlin School. Even without invoking the whole debate over the legitimacy and continued relevance of the categorization, it’s safe to say that I Was at Home, But… makes for an uneasy fit. For instance, it could hardly be considered a critique of neoliberalism from a German perspective, one of the unifying characteristics laid out in the authoritative body of literature on the Berlin School authored and/or edited by Marco Abel. In fact, there is little that is specifically German about the film at all, as its portrait of motherhood could easily be transposed to any other Western country. Gone are the allusions to broader sociopolitical realities found in Schanelec’s previous films, such as the current events unfolding in the background of The Dreamed Path (2016) or the postcolonial violence simmering at the edges of Marseille (2004). Apart from one character’s foreign nationality, which gets but a brief mention, there is little acknowledgement of an exterior world, and Berlin as a setting is also largely deprived of specificity.

Although Schanelec has always de-emphasized the city’s symbolic significations in the many films she fully or partially set there (i.e., all her features except Orly), this time she appears to have chosen locations specifically for their interchangeability. Much of I Was at Home, But… takes place indoors, and the few building façades or streets that are seen offer scant means of orientation. Through a prevalence of full and medium shots, and lacking the big geographic and chronological jumps common to Schanelec’s narratives, Berlin is conveyed as an intimate, almost hermetic space wherein the small set of characters frequently cross paths, sometimes taking notice of one another, sometimes not. There is even a lengthy scene set on the popular shopping avenue Kurfürstendamm, one of Berlin’s most iconic locations, photographed to seem like virtually any other street. At the supermarket, the protagonist Astrid (Maren Eggert) randomly meets a film director played by Dane Komljen (already the notion of routinely buying groceries on Ku’damm is odd, never mind running into someone else doing the same). In a ten-minute tracking shot, they walk home together, discussing the use of actors in the director’s film. They hardly cross any other pedestrians, although in real life the pavement is teeming with shoppers and tourists, and the flashy window displays barely register as the camera and performances direct our attention to the conversation’s rhythm, with the director remaining hilariously composed while Astrid discharges an increasingly impassioned rebuke of his work.

This tight focus is expressive of the film’s theatrical dimension, while simultaneously feeding into the existentialist thrust of the narrative. Following an Edenic prologue involving a donkey, a dog, and a rabbit (which was shot in Serbia), the film relocates to Berlin, where Philip (Jakob Lasalle), Astrid’s 13-year-old son, returns home after having disappeared for an unspecified length of time. The Ozu classic to which Schanelec pays titular homage, I Was Born, But… (1932), charts the changing dynamics within a family after the father humiliates himself in front of his two young sons, shattering the idealized image they hold of him. Philip’s disappearance, also representative of his loss of childhood innocence, triggers an analogous crisis within his family, though Schanelec inverts the perspective by focusing on the emotional repercussions for Astrid. Her story is punctuated with scenes of Philip and his classmates rehearsing Hamlet at school, with Philip in the role of Hamlet and the children reading from Schanelec’s own published translation of the play (co-authored with her late partner, the theatre director Jürgen Gosch).

There are echoes between the play and the film’s plot, most notably the structuring absence of Philip’s father, who died two years earlier, and the conflict between Philip and Astrid. Considering that the passages performed by the children refer to Hamlet’s dichotomous conception of femininity, their sporadic break-up of the narrative has the effect of a chorus. Schanelec insists that these parallels, as well as those between Astrid and the iconographic references to the Virgin Mary, are incidental. Although the feminist reading that these elements seem to invite is unintentional, their inherent symbolic strength nevertheless lends a tragic dignity to Astrid’s suffering that doubles as a universalizing gesture. The potentially normative implications of such juxtapositions are offset by a subplot involving one of Philip’s teachers, Lars (Franz Rogowski), and his girlfriend Claudia (Lilith Stangenberg). In a poignant dialogue set at dawn, Lars attempts to change Claudia’s mind about not wanting children. “I’m scared of vanishing…Then there’s nothing left,” he pleads, but Claudia maintains that she has a “mission” and although she can’t articulate what that mission is, she knows it doesn’t involve becoming a mother.

The notion of searching for something essential yet impossible to describe or even fully conceive represents an existential longing that has afflicted all of Schanelec’s characters to date, and which drives the films themselves. In striving for the ineffable, I Was at Home, But… takes a step further along the trajectory towards a spiritual cinema that began with The Dreamed Path. With this shift came a more open embrace of Bressonian motifs, such as the synecdochic close-ups of body parts, especially hands, performing purposeful actions. The entire climactic duel between Hamlet and Laertes, for instance, is composed of such shots. Throughout the film, the camera very rarely moves and characters often remain immobile, creating ravishing tableaux whenever several figures occupy the frame. The pervading stillness is punctured at specific moments through tactics that burst the mise en scène’s carefully maintained austerity. In the most affecting scene, Astrid visits the graveyard where her partner is buried. It’s night, and when she climbs over the graveyard fence, the film’s only piece of extradiegetic music starts playing. As M. Ward’s mournful cover of David Bowie’s “Let’s Dance” fills the soundtrack, Astrid collapses in front of the tomb, triggering a flashback that shows her, Philip, and his younger sister Flo (Clara Möller) dancing in front of the father’s hospital bed. The scene’s emotional force is devastating, with the implementation of two showy devices (in strictly relative terms) provoking such a shock that the film’s reality is momentarily ruptured, allowing for an incursion of the sublime. Here, it happens to be embodied by a quail that comes to keep Astrid company by the grave.

Despite the allusions to the Virgin Mary, the supernatural presence of animals signals that the film’s spirituality is not to be read as religious. The pastoral scene from the opening reappears in the final moments. Should the donkey looking out the window be interpreted as a deific incarnation, beatifically and impotently spectating the film’s human drama? Or is it simply a donkey, beautifully illuminated by the golden sunlight falling on its face? Probably the latter, and yet, when it turns its head to look at us, its gaze pierces right through our soul.