“I Do Not Care If We Go Down in History as Barbarians” (Radu Jude, Romania/Czech Republic/France/Bulgaria/ Germany) — Contemporary World Cinema 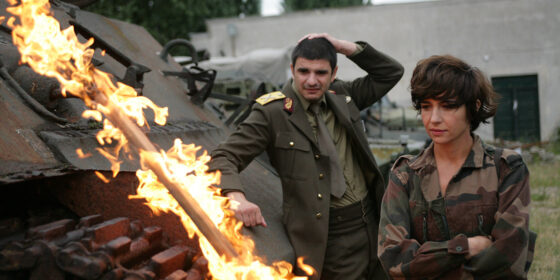 It’s never a pleasant sight to see a film trying to punch above its intellectual weight class. “I Do Not Care If We Go Down in History as Barbarians” (the quotation marks are an official part of the title) is certainly a film with a lot on its mind. Specifically, director Radu Jude is interested in examining cultural amnesia and the role that official pageantry plays in maintaining such active forgetting. A young theatre director (Ioana Iacob) has received a municipal commission and, rather than staging the usual patriotic claptrap, wants to have World War II re-enactors perform a stylized version of the Odessa Massacre, during which thousands of Jews were exterminated by orders from Romanian national hero Marshal Antonescu.

Jude’s film is not a complete failure, and it does have some genuinely experimental moments. Twice, the action stops dead in its tracks so that the film image can be overtaken by still photographs of the massacre, while analytical conversations continue in voiceover. These brief excurses actually bring “Barbarians” close to the critical territory Jude clearly wants to stake out: the political modernism of Alexander Kluge or Yvonne Rainer.

But sadly, most of the film consists of tedious and predictable conversations about the role of art in society, the question of whether the masses are too stupid to educate through popular means, and if the entire enterprise of political art is elitist. What Jude clearly thinks are probing questions about the topic at hand are wholly undergraduate in scope, and “Barbarians” doesn’t have a much more complex notion of Brechtianism either. (The play-within-a-film structure is as conventional as you’d find in any Hollywood production, save “breaking frame” by calling the lead actress by her real name at the beginning and end.) Concluding on a note of cheap irony that any attentive viewer should see coming a mile away, “Barbarians” is a well-intended misfire that makes the ’60s and ’70s cinema of Godard, Oshima, and Bertolucci feel as remote and elemental as the cave paintings of Lascaux.