I Am Not a Witch (Rungano Nyoni, UK/France) — Discovery 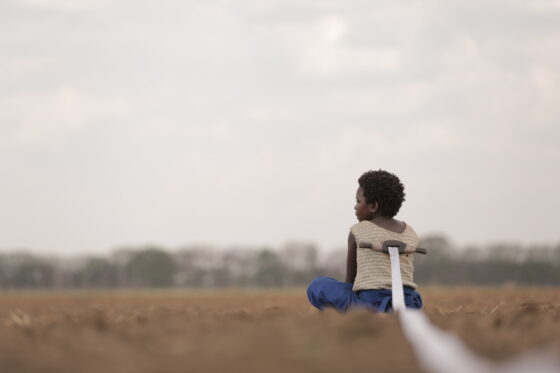 Rungano Nyoni’s debut feature, a deadpan observation of the superstitions and misunderstandings hanging over everyday life in a small, present-day Zambian village, has all the characteristics of a light comedy of manners. The film follows Shula (Margaret Mulubwa), a young girl who is one day accused by her neighbours of being a witch, simply because nobody knows her and it hasn’t rained in the area ever since she arrived. This absurd situation, initially played for humour, is much less amusing once it becomes clear that Zambian officials not only accept the existence of witches, but use this popular belief to blame their own faults and shortcomings on women such as Shula. Without protest or trial, the girl is secluded to a “witch camp” at which she is forced to work and grant wishes; when they don’t come true, she is punished.

Mulubwa’s stoic performance is the key to the film, giving the audience an entry point to the action and facilitating the story’s electric and unpredictable shifts between dark humour and pure tragedy. Shula’s unreadability is in sharp contrast with the outgoing attitude of Tembo (John Tembo), the Zambian official who decides her fate; a liar and a hypocrite, as amusing as he is infuriating, he recalls the incompetent politicians from the films of Ousmane Sembène. The film’s feminist critique gradually creeps up on the viewer with understandable and invigorating anger, culminating in a gut-wrenchingly shocking ending.