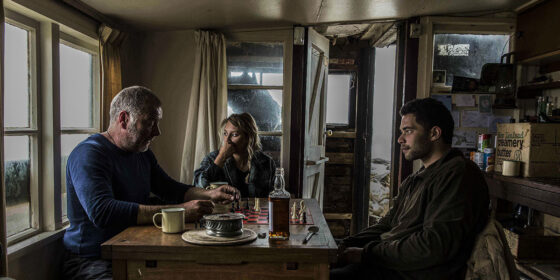 Scientific findings keep revealing, with an accelerated urgency, the disruptive and irreversible impact that human activities have on the natural environment and on the species that coexist with them on Earth. Set at a remote sub-Antarctic research station, Nic Gorman’s Human Traces attempts to fuse an urgent message about environmental consciousness with an enigmatic psychological thriller—and while this is a tall order to begin with, it is not the film’s ambition that is ultimately at fault here.

On an island 750 kilometres south of New Zealand, husband-and-wife scientist team Sarah (Sophie Henderson) and Glenn (Mark Mitchinson) have been tasked with monitoring the local ecosystem, with the goal of returning the island to its natural state. Their significant age difference does not appear to be an issue, until a handsome stranger named Pete (Vinnie Bennett) arrives, and his strange behaviour triggers a gradual crescendo of paranoia.

So far, so good, but the film’s narrative choices make it far less easy to grasp the stakes at play. The particular, Rashomon-like construction, with three chapters presenting the same events from diverse points of view, is not the issue; more problematic is the filmmaker’s unwillingness (fear?) to be in the present moment. Shots and scenes don’t last; the camera sneaks in and out of rooms where we never get to truly meet the characters, and even the sight of a cloudy sky can’t be taken in without accelerated motion (slow motion also comes into play a couple of times, for no apparent reason). It goes without saying that the use of sound is equally turbulent, with snippets of arrhythmic dialogue and piano chords sprinkled over shots, a harmonious enough but ultimately inexpressive composition. Relentless agitation on the scales of space and time is not ideal to let tension be born, let alone grow. If you won’t face the challenge of making every scene and every shot present, the risk that you unavoidably face is that your thriller may be left without the thrills.