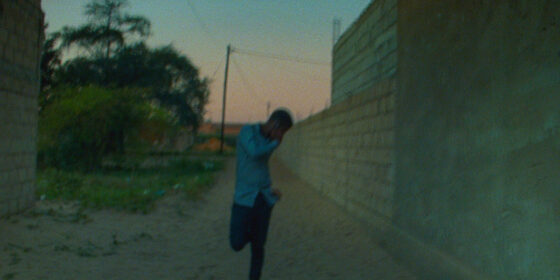 From the bottom of the sea, across a city, and into the stratosphere; from the moon, through a deserted city, deep into the forest, and down into a hole in the Earth. Argentinian director Eduardo Williams’ recent short films—Could See a Puma (2011) and I forgot! (2014)—follow strange trajectories both over and through landscapes. With his newest film and first feature, The Human Surge, winner of the main prize in Locarno’s Filmmakers of the Present competition, he takes us from a dark domestic space in a flooded city across three continents, through the networked tunnels of an ant-hill, before emerging, finally, in the fluorescent glare of a lab for inspecting tablet computers.

Williams’ cinema is one of vectors: across borders, networks, and states of being. These routes are not simply migrations, although social, economic, and geographical impermanence is certainly central to his logistical mapping of his young characters’ lives. Rather, Williams’ films follow a system of intersecting lines and pathways that carry us beyond the mundane surface of reality to other places entirely.

While studying at Buenos Aires’ Universidad del Cine and then Le Fresnoy, Williams refined a distinctive style across a set of increasingly ambitious short films. An early work such as Tan atentos (2010) focuses on extending and elaborating certain rhythms and longueurs: afternoons spent in interstitial roadside spaces or wandering the aisles of a convenience store descend into evenings of hanging out, fucking around, walking, exploring. This peripatetic tendency emerges right away in the wild, 360-degree panning that opens Alguien los vio (2011) and in the floating, faltering long takes that make up the bulk of both films’ running times. These films convey a sense of being lost—both geographically and, maybe, emotionally—but in his more recent films, Williams adds the slightest semblance of narrative, with his characters, who are almost invariably cute guys in their early 20s, talking about jobs or relationships or tattoos or nothing in particular. More recently still, this restlessness seems to have infected the filmmaker himself: I forgot! takes place entirely in Vietnam; The Human Surge rambles from Argentina to Mozambique to the Philippines. But, fittingly, these milieus are rendered by Williams as a set of unfolding landscapes, alternately distinct and alien in their local particularity and flattened by the similarity of their socio-economic backdrops: bland technocapitalism, precarious employment, or rural spaces in the process of becoming urban, if not falling back into entropy.

Darkness and light, change and repetition, variation and sameness—The Human Surge’s first dim, grainy shot finds us in the half-light of a house in Buenos Aires before sending us out into what seems like the aftereffects of a raging monsoon. In this first section of the film, Williams’ character subsists in a hapless supermarket job—before, we’re later told, being fired—while his friends make ends meet by half-heartedly stripping and sucking each other’s dicks on some kind of webcam marketplace. It’s here we meet the protagonists of the film’s second section in Maputo, Mozambique, who are even more half-hearted in their efforts at online self-display, opting instead for a more nebulous combination of office work and risky migratory labour. This sort of work remains the theme of the film’s final section, in which a set of uprooted characters (are they lovers? strangers?) traverses a jungle in the Philippines in search of home, a place to relax and swim, or a cyber café.

Unstructured downtime seems to fill up the cracks of the film’s many forms of labour: webcam sex work, industrial labour, desk-jockeying, manufacturing. And all of these types of work seem to bear an ambivalent relationship to the networked digital spaces that the film’s characters on all continents are constantly (and usually unsuccessfully) trying to access. The Human Surge creates a sense of continuity across widely disparate places, a continuous unrolling of geographic space held together by an ambivalent sense of interconnectedness through technology. Characters seem rooted in particular spaces and ecologies—of media and relationships, as well as of natural surroundings—lending the film that curious mix of sensations peculiar to the experience of travel: excitement, confusion, boredom, fear, uncertainty. And through its obsessive real-time attention to its characters’ often banal activities—drifting imperceptibly between work and play (or hovering somewhere between both simultaneously), as well as its indiscriminate crossing of borders and mixing of languages—the film maps a diffused landscape of contemporary precarity, one that’s both physical and virtual, hyperconnected yet fragmentary.

Even the film’s cinematography takes up this notion of migration in its play with formats. Williams and his cinematographers Joaquin Neira and Julien Guillery have filmed each section with distinct—and distinctly hybrid—moving-image technologies: for the first section, Super 16mm; the second, shot using a Black Magic camera, then filmed off a monitor in Super 16mm; and the third, simply RED digital video. Uncertainty and obscurity is thus built into the very colour and texture of the images, which shift imperceptibly from the concrete to the oneiric, pivoting between the artificial and the organic, the pixel and the grain, the fluid and the rigid. This sense of the indistinct and the opaque seems to infect the film’s cinematography as well. Images are forever plagued by a curious haziness: figures are often difficult to discern, and, even in full light, characters complain of the heat while swimming about in what seems like a permanent dusk. The colour palette shifts from grainy blacks to dim blues and oranges, as if the world has descended into a permanent shadow, only occasionally pierced by the glaring illumination of a laptop or mobile screen.

And this shifting sensibility is, of course, intrinsic to the camera’s relationship with the characters, as well: always roaming, deliriously unstable, and unabashedly imperfect. If 21st-century cinema effectively began with a camera floating dreamily after Shu Qi along a fluorescent-lit Taiwanese overpass at the start of Hou Hsiao-hsien’s Millennium Mambo (2001), or with the Steadicam fluidity of similar shots of the back of characters’ heads in films by the Dardenne brothers, The Human Surge seems to offer an important update, multiplying its wayward pathways and unmoored characters, randomizing their points of intersection, and permanently detaching the camera from its place of stability and control. The wobbly, handheld indeterminacy of these shots gives them a rather different expressive function: generating an ever-unfolding mise en scène, a kind of worlding around the protagonist that subverts the traditional sense of the usually implied authorial position. We’re not even sure, for much of The Human Surge’s running time, whether we are looking at characters or subjects: though presumably a fictional narrative, the physical and psychological triangulation between camera, cameraperson, and subject suggests the voyeurism of documentary. Random passers-by inquisitively gaze back into the lens in street scenes as if puzzling over the same questions: Who are you and what are you looking at? We are always shadowing the characters as if we’re one of them, lingering behind them as they traverse their respective landscapes. Pasolini’s notion of the “free indirect discourse” of the cinema—the sense that the camera takes up an ambiguous point of view between first and third-person perspectives—returns in The Human Surge as the permanent condition of an era in which ubiquitous media and 24-hour visibility are nonetheless no guarantee that one will ever be seen.

In an interview for MUBI’s Notebook, Williams said: “This type of image can also create the sensation of not knowing where you are supposed to look and at the same time can attract you by the constant movement that creates a melody between surprise, variation, and connection of different spaces and bodies.” And, indeed, this dance between confusion and seduction, between a desire to know and a desire to remain, as it were, in the dark, is the key to the film’s subterranean pull. In a sense, The Human Surge offers as a possibility for cinema a true sense of being lost, not just through the by-now common use of improvisation and non-professional actors, nor through an over-investment in contingency (much less “the real”), but as a kind of principle that guides both the experience of making films and the experience of watching them. There is a high degree of uncertainty in even the most basic components of Williams’ process. For some of his recent films, for example, he has deliberately worked in places where he didn’t speak the language (Vietnam for I forgot!, for example), only translating the dialogue much later during editing.

The Human Surge, in its transit between languages and cultures, offers its performers a similar freedom—though of course Williams retains the right to shape and rearrange the characters’ words during editing. Still, this sense of openness to misdirection, this sense of searching and maybe not quite finding, leaves its mark on the film’s unsteady rhythms. Even the film’s emphasis on groups rather than individuals utterly scrambles any notion of a clear narrative arc. Always decentralized and unfixed, Williams’ structure ensures that the precise contours of each relationship or sense of causality—indeed, even a straightforward idea of who’s who and what’s exactly going on at any given moment—remain ambiguous, and often literally hard to see. Situations develop, but often come to no apparent climax. Conversations lead nowhere, play out on one end of a cellphone (“Hi…What’s up?…I don’t know…Maybe…Yes…OK”), or lurch forward in short aphoristic spurts. One character offers this, seemingly just to himself: “I wanted to say something…but then I lost track of my own thoughts. Sometimes I allow some words to carry me far away and I end up in the exact same place where I got lost.”

One could, I suppose, read into this sense of being lost a kind of critique of contemporary life—of a world destabilized by the ravages of technology, its inhabitants always living in isolation from one another. And, indeed, the film dangles such possible interpretations, with its implication of a future much like the sterilized and brightly lit computer lab we see at the film’s end, and through occasional comments about a future in which, as one character augurs, silence will sound like a crowded food court. But these concerns don’t quite approach what Williams seems to be getting at; his filmmaking is far too slippery for this. Rather than placing their subjects in a particular social space or critical framework, Williams’ films instead tend to locate their subjects in a kind of atmosphere, even a kind of ecology—of relationships to other humans and other species, and to technologies and to landscapes. This is perhaps why The Human Surge expends so much time leading us through so many of them: domestic spaces and economic zones, fields and forests, basements and communications cables—even, in a surprising set of dissolves, seemingly all the way through the centre of the Earth.

“Nature is a kind of technology,” Williams has said, and in this sense the film regards the world as a series of networks, its elements as so many media. Roots and underground passageways connect spaces in the same way as fibre optics and mobile networks; air, earth, and urine are as much media as electricity and the cinema itself. This “surge,” then—offered so boldly by the film’s title, but somehow submerged in the film’s laconic tempo—might be less singularly human and more general, more difficult to properly categorize. In Williams’ film, this pulse of energy is everywhere, running through and between all of the subjects: human, animal, material, ambient, and machinic.