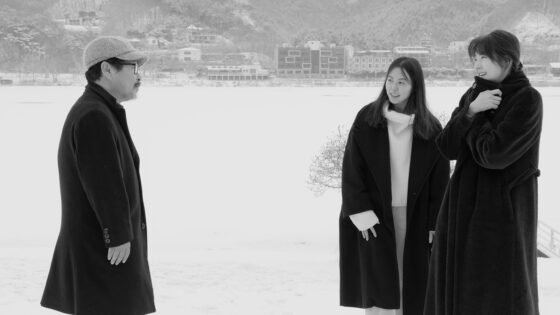 Decidedly melancholy, at times even downright dark, Hong Sangsoo’s 23rd feature, Hotel by the River, continues the South Korean maverick’s recent turn toward unguarded vulnerability and introspection. One of Hong’s winter pictures (c.f. The Day He Arrives, 2011; Virgin Stripped Bare By Her Bachelors, 2000), the film deals with family dysfunction, creative isolation, and growing old in stark, matter-of-fact fashion. The deceptively straightforward story, set in and around the Hotel Heimat on the banks of the Han River, follows two sets of unrelated characters: a romantically forlorn young woman (Kim Minhee) and her visiting companion (Song Seonmi), and an aging poet (Ki Joobong) and his two semi-estranged sons (Kwon Haehyo and Yoo Joonsang). Over a 24-hour period, the lives of these five characters will brush up against each another, occasionally intersect, and sometimes parallel one another, never impeding much on their counterparts but creating a fascinating series of echoes, contrasts, and internal ellipses.

Haunted by premonitions of death, Ki’s poet invites his competitive sons (who provide a good deal of comic relief) to meet him at his hotel, where he appears to be hiding out, or at least taking creative respite. Across the hall, Kim’s naïve romantic is being comforted by a friend following a breakup with her married lover. Shooting in black and white, Hong captures these contrasting dramas in typically unadorned style, utilizing the hotel as both a symbolic space of refuge and reconciliation and a practical setting for the comings and goings of a variety of personalities (although, curiously, these five seem to be the hotel’s only visitors––is this a character study or a ghost story?). In a masterfully staged dinner sequence (the only time the film leaves the vicinity of the hotel), the men, fuelled by gallons of makgeolli, confront a lifetime of demons in a moment of emotional bloodletting to rival the climatic interpersonal breakdown that punctuates On the Beach At Night Alone (2017), while the women, seated nearby, quietly eavesdrop. An unexpected, disarmingly poetic flourish follows, as Hong dovetails these stories one final time, suggesting at once potential pasts and impossible futures, in the process opening up the film to a number of personal readings. Following this past winter’s Grass, which similarly ruminated on death and prospective paths, Hong’s latest confirms a nascent sorrow in this increasingly complicated director’s work. The results are troubling, touching, and never less than beautiful.