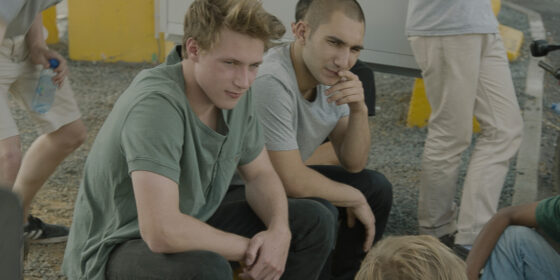 Is giving a film an abstract noun as its title ever a good idea? Shorn of context, words like “love,” “happiness,” or indeed “home” automatically become grand statements of intent, attempts to speak to the universal nature of things that all too often land closer to the blunt or the facile rather than the profound. It’s the same story with Fien Troch’s Home, a slick, run-of-the-mill teen drama that shows in none-too-subtle fashion what can happen when affluent Belgian youngsters are deprived of domestic solace. No prizes for guessing “nothing good.”

Kevin (Sebastian Van Dun) has just been released from a young offenders’ institution where he was sent for beating up a guy on the street. As his parents don’t want to deal with his violent impulses, he’s sent to live with his cousin Sammy (Loïc Bellemans), whose parents have ambitions for him already denied to Kevin. Sammy’s best friend John (Mistral Guidotti) has a mother with serious boundary issues, while his girlfriend Lina (Lena Suijkerbuijk) quickly develops feelings for Kevin, even as she occupies the thankless position of the group’s moral compass. Initially at least, Troch seems largely concerned with observing the teenagers’ daily lives, capturing school, home, and leisure time alike with the same, now-ubiquitous Dardennian handheld camerawork, pimped up with occasional zooms, cell-phone footage interludes, and invasive bursts of Chromatics on the soundtrack, with some grittily frank scenes of sexuality thrown in for good measure.

While seeing adolescents drinking, smoking, back-talking, and dealing with angst is hardly revelatory, it’s still preferable to listening to the reverberations of the big narrative thud that ensues when the angst of one of the characters reaches breaking point. Growing up can indeed be murder, but rendering this experience as literally and as stridently as it is here is both obvious and implausible, particularly within a setting thus far tooled for maximum authenticity. The questions of morality and responsibility that this act of violence are supposed to throw up are thus drowned out by other, more prosaic queries: Would any of these people act in such a way if some overdetermined plot weren’t telling them to do so? But perhaps that’s only to be expected from a film that already lays out its agenda in its title. For better or worse, there’s no place like home.