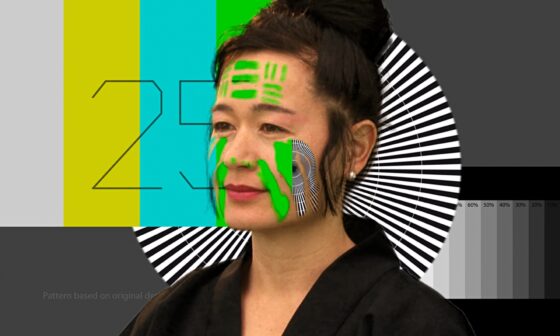 How Not to Be Seen

The society whose modernization has reached the stage of integrated spectacle is characterized by the combined effect of five principal factors: incessant technological renewal, integration of state and economy, generalized secrecy, unanswerable lies and an eternal present.—Guy Debord

“Even though political art manages to represent so-called local situations from all over the globe, and routinely packages injustice and destitution, the conditions of its own production and display remain pretty much unexplored,” laments Hito Steyerl in her essay “Politics of Art: Contemporary Art and the Transition to Post-Democracy.” The polemical thrust of Steyerl’s work, her aesthetic engagement with the abstraction of the neo(il)liberal art world, is directed toward the contradiction delineated in the above quote. Instead of safely retreating into the considerable (if conditional) freedoms that the art world still offers in comparison to the increasingly censorial mood of the mainstream media, Steyerl opted to cut the ground out from under her own feet. Whether moving or still, her images are unfit for ornamental purposes: her work consistently questions and critically undermines the very premises of its existence, fruition and assimilation, reflecting on the inadequacy of art spaces and their stifling nature. If art, as JG Ballard once said, is “the opium of the educated middle classes,” Steyerl’s work is heretical paganism, seditious agit-art that demands the re-activation of affective connectivity.

This is why Steyerl’s creations emanate an urgency that is rarely found in the gallery-fillers and art debris whose exhibition spaces they sometimes share: working along the collapsed lines of various art disciplines and practices, they help expose the void lurking behind labels. While Steyerl’s work with moving images (only one of her many tools of artistic interference) recently occasioned an exhibition at London’s Institute of Contemporary Art in London, her filmmaking endeavour is the furthest one can imagine from cinephilic fetishism and celluloidreaming nostalgia; rather, she scavenges for her materials in that digital landfill whose mounting walls of data garbage are gradually occluding our social view, the incessant stream of low-resolution digital images that pollute our vision and forcibly occupy the relational space between ourselves and others. Hers is post-cinema, if by “cinema” we denote a narrative form collectively consumed in front of a big screen, in the dark.

“The art space has become a hotbed of contemporary production. Of images, jargon, lifestyles, and values. Of exhibition value, speculation value, and cult value. Of entertainment plus gravitas. Of aura minus distance. A flagship store of Cultural Industries, staffed by eager interns who work for free.”

The German artist works with what she herself has termed “poor images”: “a rag or a rip; an AVI or a JPEG, a lumpenproletariat in the class society of appearances. Poor images are the contemporary Wretched of the Screen, the debris of audiovisual production, the trash that washes up on the digital economies’ shores. They testify to the violent dislocation, transferrals, and displacement of images—their acceleration and circulation within the vicious cycles of audiovisual capitalism.” While the poor image is usually part of a distracted mosaic with no narrative or critical intent, Steyerl’s compositions are meaningful efforts to articulate a critique, to find sense in a senseless environment, new forms to articulate this cultural void and its jaded cynicism. When the only certainty is that the forms and tools with which we have framed the past century no longer apply to the desertification of the contemporary, she questions the supposed end of everything and the convenient rhetoric of “post-” to confront the present.

Steyerl has no illusions about art’s position in the modern world. “Contemporary art is no unworldly discipline nestled away in some remote ivory tower. On the contrary, it is squarely placed in the neoliberal thick of things.” Far from being some elite activity removed from capitalist “reality,” art and its world, Steyerl suggests, is that reality’s most unflattering and authentic mirror image, the art gallery itself reflecting “the blank horror and emptiness of the bourgeois interior.” “If contemporary art is the answer, the question is, how can capitalism be made more beautiful,” Steyerl writes. Art as a luxury item in the industrial entertainment complex’s arsenal of mass-mediated weapons, creativity merely an asset of cultural hegemony and image-laundering: “A country with human-rights violations? Bring on the Gehry gallery! The Global Guggenheim is a cultural refinery for a set of post-democratic oligarchies.”

Working hand in hand with the transglobal oligarchies, art is anything but harmless or ineffectual—quite the contrary. A recent action by Global Ultra Luxury Faction members during the Futurist exhibition at the Guggenheim to protest against the inhumane conditions of migrant workers in the Abu Dhabi branch was met by a concerted security response. Often thought of and experienced as recreational playgrounds of urban coolness, museums are on the contrary soft-power institutions that defend the interests and financial might of the art cartels. In her short video Guards (2012), Steyerl interviews two security staff members at the Art Institute of Chicago, fully-trained Marines now enlisted in the Ministry of Art Defense. The museum’s exhibition spaces duly become theatres of war as one of the guards performs a simulated security response in case of an attack. What is telling about the role of the museum security staff is that their job is to protect art, not visitors, as one of them unequivocally admits (“We have to look at things based on art rather than people when considering what is a priority response”). Interests before people, profit before human relations, security over rights: it would be hard to find a clearer exemplification of neoliberal values. Even the supposed basis of art, creativity, once associated (at least nominally) with bohemian types on the fringe of society, is now one of the most strategic assets of abstract capitalism. Images create value; brands, and the narratives they convey, quite literally rule this sorry world of ours.

Not coincidentally, to see and be seen are the most pressing imperatives of our audiovisual economies. To disappear is to subtract oneself from the fluxes of semiotic capitalism—the subject of another Steyerl video work, the fittingly titled How Not to be Seen: A Fucking Didactic Educational .MOV File (2013). First shown/exhibited/fed to audiences at the Venice Biennale, the video revolves around and hovers over disused photo-calibration targets in the Californian desert— once used to test the resolution of analog aerial photography, they now look like abandoned Mayan temples on Google Earth—while speculating on our contemporary pan-optical besiegement and suggesting possible escape plans. To retreat into gated communities or tax havens, to be over 35 years old (if you’re a female) are some ways to make yourself invisible, but also voiceless; another is to scale yourself down to the size of a pixel, helpfully illustrated in the video by mimes wearing quadrangular, pixel-like boxes on their heads. If clandestinity once required a low profile, these days the cyber outlaw needs a low resolution, though a burqa might just do the trick as well. To use images in order to show how to be invisible is the signifying contradiction at the heart of Steyerl’s video, as it is at the bleeding heart of our virtual condition. Is there really no escape from the tyrannical rule of appearances? Does disappearing inevitably mean also ceasing to exist? Is there life before and beyond images?

“Even the poor image ends up being perfectly integrated into an information capitalism thriving on compressed attention spans, on impression rather than immersion, on intensity rather than contemplation, on previews rather than screenings.”

In her recent work Liquidity Inc., Steyerl shuffles through the different attributions that the term “liquidity” has acquired in today’s context. Opening with Bruce Lee’s remarks (borrowed from Sun Tzu’s The Art of War) on the strategic use of liquidity in martial arts, the video finds its theme embodied in a single protagonist: Jacob Wood, a former Wall Street player who, after the credit crunch hit, returned to his former, bone-crunching pastime of mixed martial arts (a.k.a. “beating the living shit out of each other”). In Wood’s story we see played out the polar yet complementary extremes of our age: abstract finance and physical distress, indirect, stainless violence and blood-drenched, neo-tribal combat. Shapeless as well as shaping, severing as well as connecting, destroying as well as creating, liquidity unites these ostensibly opposed realms. Though we can map it, we cannot navigate it; and as Steyerl’s frame becomes inundated in an internetted ocean of data and images (chat screens, email windows, etc.), Liquidity Inc. begins to drown in its own eponymous element.

“If people aren’t trapped within natural or man-made disasters, they seem to physically vanish, as anorexic beauty standards imply.”

The texture of Steyerl’s moving-image work is made up of what our daily net drifting consists of: desolate desktops, Youtube clips, virtual images, concrete illusions that the artist somehow manages to render in lyrical terms. There is a cognitive critique in her work, often ironic, but never cynically defeatist or self-absolving. Conscious of the loss of meaning and dispersal of knowledge under the digital avalanche, she pits against the info-graphical pornography of data the carnal dimension of the intellect. When corporate vampirism is monopolizing memory, search-engineering our journeys of discovery, is there a way to overcome apocalyptic individualism, to break the cage of collective loneliness? Steyerl sacrifices her own artistic ego in an attempt to reinstate the importance of solidarity, for militant engagement is always in the name of something and someone other than ourselves. Insistently engaging the spectator while simultaneously questioning its own validity, Steyerl’s work emerges the possibility of a potential new form of theoretical elaboration and politically engaged practice. Since the traditional figure of the intellectual has been capsized by that digital populism that renders opinions more relevant than knowledge and polls more authoritative than books, new forms of theoretical passion are needed. Critical thinking, as in Steyerl’s work, needs to be aroused rather than pedantically illustrated; the contradictions of our totalitarian democracies must be playfully and fiercely mocked rather than explained. The analogical intellectual is to be replaced by the digital folk-hero: media pranks and hoaxes are more effective than lectures, and every discipline is to be subtracted from its systemic subservience. Beginning with art, for art is everywhere… “and when it is finally dragged into Gagosian dripping from head to toe with blood and dirt, it triggers off rounds and rounds of rapturous applause.”