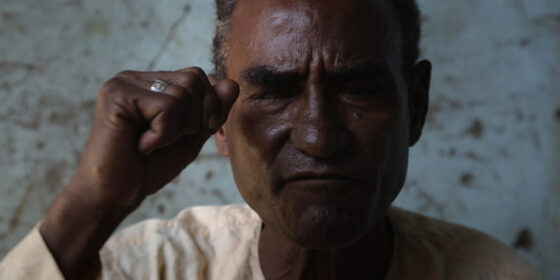 At a time when documentaries are increasingly resorting to gimmicky ruses, Mahamat-Saleh Haroun’s simple and austere film on the bloody legacy of Hissein Habré, the Chadian dictator who was found guilty of war crimes by a court in Senegal in May, is a breath of fresh air. Completed before the trial ended, but at a point when the human rights community looked forward to the eventual verdict, the film is a meditation on political barbarism that believes that a sober presentation of the facts is preferable, for better or worse, to the re-enactments and metafictional strategies of filmmakers like Joshua Oppenheimer. Like Claude Lanzmann, Haroun abjures the use of archival footage and foregrounds the testimony of victims.

Sponsored by both France and the United States—supposedly because he provided a “bulwark” against Gaddafi’s Libyan regime—Hissein Habré, whose reign of terror lasted from 1982-1990, was responsible for the death of an estimated 40,000 Chadians and a political climate that resulted in the torture of countless others. In a logistical manoeuvre that balances detachment and  impassioned outrage, Haroun uses an intermediary, Clément Abaifouta, Chairman of the Association of the Victims of the Hissein Habré Regime, to conduct most of the interviews. The interviewees recount, in gruesome detail, the sadism of the DDS (Directorate of Documentation and Security), the secret police who functioned as freelance agents of terror. From the evidence of the film, most of the victims were not even political opponents or militants but innocent civilians ensnared by totalitarian madness. In a haunting echo of previous genocides, a former torturer admits that “he was just following orders.” It is to Haroun’s credit that he lets this statement stand alone, without any editorial embellishments. For the attentive viewer, there’s no need for the director to connect the dots and invoke historical precedents.