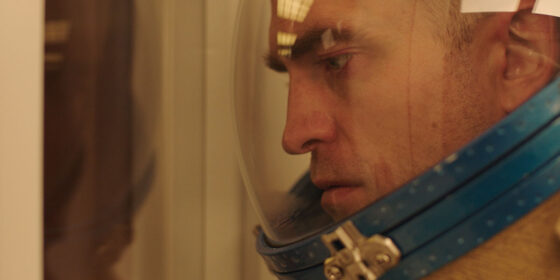 There is a shot of an infant being carried by its father in Claire Denis’ L’intrus that may be the most rapt and tender image of its kind I’ve ever seen in a film. The first ten minutes of High Life are an extension and an elaboration of that shot, observing Monte (Robert Pattinson) as he feeds, changes, cuddles and consoles the baby daughter who is seemingly his only (living) companion  on a spaceship that resembles nothing so much as a series of Earthbound sets strewn with anachronistic looking flat-screens. When the lithe, close-cropped ex-con is not doting on his kid, he’s tending an artificially Edenic garden located somewhere in the ship’s bowels, a fertile space just waiting for sin to bloom there and give it meaning.

“Taboo” is the first non-baby talk word spoken aloud in High Life, and it’s also probably the last word on a film that is as self-conscious about its daring as Trouble Every Day, which it resembles both in its adoption of genre tropes and its extreme, disturbingly sexualized violence. Still, despite these surface provocations, the film seems closer (at least for me) to Denis’ more recent features 35 rhums and Bastards with their disparate but linked visions of excessive paternal affection. Although if somebody were to suggest an entirely different read on this defiantly abstract, metaphorically spacious, and deliberately artificial-looking UFO of a movie, I’d gladly hear them out. In fact, I’ll suggest one other angle of approach, which is that the French-braided Juliette Binoche—playing a witchy mad scientist who, it’s revealed in flashbacks, used Monte and the other supple inhabitants of their interplanetary craft for some weird, obsessive, fetishistic experiments—is as much a directorial surrogate here as she was in Un beau soleil intérieur (and in a way that’s more actually about movie directing itself, pivoting on the idea of maternal creation by some hot young proxies). No further spoilers here—for that, check Twitter. As it turns out, Un beau soleil’s practical, affirmative motto is also the best way to approach the more daunting object that is High Life: be open.