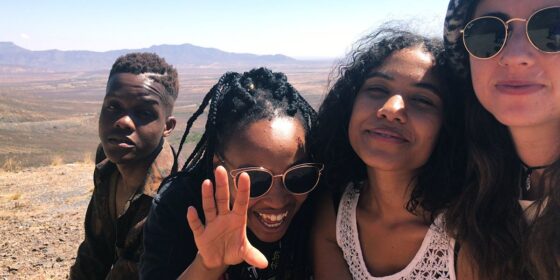 The ’80s-style Hollywood body-swap comedy gets a purposeful and political makeover in High Fantasy, an inventive and entertaining South African feature that cleverly yokes heavy subject matter to an agile DIY aesthetic. Shot entirely on iPhones wielded by its adolescent cast members (who also wrote the script), the film takes the form of a verité post mortem about a camping trip gone supernaturally awry: after heading off to an isolated farm on the Northern Cape, a group of four friends—three young women, one of whom is white, and their black male pal—awaken from a drug-induced stupour to find that their consciousnesses have been arbitrarily redistributed amongst them.

As allegories go, High Fantasy isn’t necessarily groundbreaking—they used to do this sort of thing all the time on The Twilight Zone. But genre is subordinate to metaphor here, and the messaging isn’t Rod Serling-simple. In this particular social and historical context, the collapsing of racial and gender binaries is anything but tidy, and there’s a rawness to the exchanges between the characters—who all articulate distinctive, yet criss-crossing, identity-crisis anxieties—that offsets any easy, walk-a-mile-in-another’s-shoes platitudes. Jenna Bass is a canny director: she means well, but doesn’t make good intentions the point of the exercise. Instead, she’s worked with her actors to create a heightened, nervy realism that’s thick with innuendo and insinuation—an intricate interplay of verbal, physical, and cinematic language that’s no less complex for seeming tossed off. (It also does help that the film is barely 70 minutes long.) With its flared colour palette and boxed-off framing (which is occasionally swapped out for gorgeous, high-angled shots of the desert), High Fantasy feels like a palpably young film; happily, its variations on themes of change and empathy are aimed at an audience that still has reason to believe.