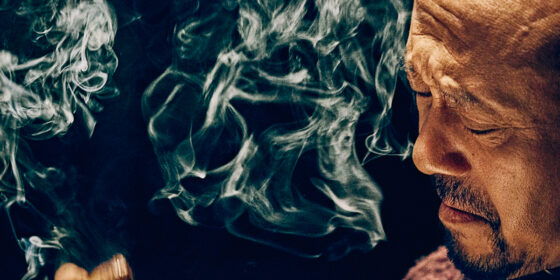 Jiang Wen’s Hidden Man poses challenges for viewers (Chinese as well as foreign), but careful watching has its rewards. The third installment in Jiang’s informal trilogy about an idiosyncratically spectacularized fictional history of Republican China—which started with Let the Bullets Fly (2010) and continued with Gone With the Bullets (2014)—Hidden Man is the least flamboyant, visually: it’s an action-adventure spy story on the one hand, and a very Beijing-style comedy of verbal jousting on the other.

A prologue set in 1922 (but mislabelled onscreen as 1992) sets up a crime that calls for revenge: evil collaborator Zhu Tianlong (Liao Fan, with a dash of Snidely Whiplash), along with Japanese official Nemoto Ichiro (Sawada Kenya), murder young hero Li Tianran’s (macho young star Eddie Peng) kung-fu master and his family. Fifteen years later, Li, after a medical education in San Francisco (cue much risible and really unnecessary English-language dialogue) returns to Beijing, now called Beiping, to exact revenge and perform some mysterious secret agent-like mission. At the centre of the schemes within schemes (I’d call this a flamboyant conspiracy-theory movie, but at the narrative level the conspiracies are all “real”) is Jiang Wen as Lan Qingfeng, Li’s adoptive American father’s landlord, Zhu’s’s buddy, and overall mastermind. Li encounters a parade of colourful characters on his long-delayed, Hamlet-like quest for vengeance, including Zhu’s anally-fixated wife Tang Fengyi (Xu Jing) and ethical lodestar Guan Qiaohong (Zhou Yun), who overcomes physical disability to teach Peng responsibility, intervene in several action sequences to save his hide, and generally steal every scene she’s in (she’s Jiang Wen’s real-life wife, so I guess she’s allowed).

The other star of the film is the meticulous production design: Jiang’s recreation of 1930s Beiping/Beijing is marvellously detailed and accurate, down to the snow-covered roofs across which Li seems to scamper and soar. But the action scenes, whose density increases towards the end of the film’s long-feeling 137 minutes, are too montage-dependent, too blur/flash/smash/cut in construction, to have the elegance and visceral power of the Hong Kong action films Jiang is referencing.

The intent seems to be to dazzle the audience, but it’s a bit of a heavy, forceful dazzle: one really has to accept Jiang’s heavily masculinized, pumped-up stagings of verbal and physical aggression on his own terms. There’s not much room or time for reflection, which inhibits the kind of allegorical analysis that his trilogy seems to be daring us to leap to. Jiang’s guilt-free mastermind Lan could represent the Party (not likely); or the long, secret reach of the CPC’s United Front scheming to mobilize non-Communist agents to serve the Party’s goals (this is my Chinese friends’ reading, when they’re not speculating that he represents the Soviet Union); or perhaps some fantasized but sadly non-existent Chinese progressive Republican faction; or maybe he embodies an atavistic principle of amoral, quasi-anarchistic self-interest (the avatar of today’s anything-goes capitalist China). But in the end, Jiang Wen is exactly and only Jiang Wen, and so is everyone else in the film: every character plays like a dispersed, splintered psychological manifestation of Jiang Wen writ large. The result is a structure of reduplicated mirrors (just like the dialogue), a solipsistic funhouse, a jangling frenzy of reflections, repetitions, contradictions, and gestures towards purgative catharses that crowd the creative imagination of one of China’s most complicated and fascinating artists.