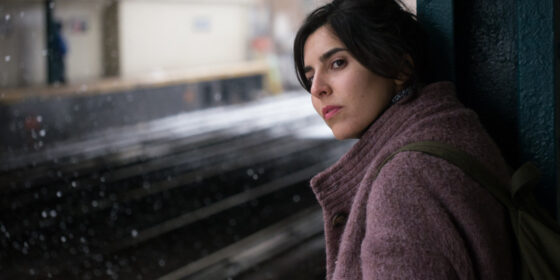 In Matias Piñeiro’s most surprising and breezy “Shakespearette” to date, he circles the Bard’s work via the issue of translation, an idea mapped onto the project in its entirety: the comedy Hermia & Helena (the title comes from A Midsummer Night’s Dream) is Piñeiro’s first film shot overseas, a large percentage in New York City, and in a different language, English. It shifts back and forth between two frames: the unfolding present of New York, and the last day of Camila (Agustina Muñoz) in Buenos Aires before she embarks on a residency abroad, literally taking the place of her friend Carmen (María Villar) at an unnamed American institution.

Piñeiro himself has translated Shakespeare to contemporary Argentine Spanish, came to the US on a Radcliffe fellowship, and supported himself as a language teacher—but here is where the comparisons end. His act of “cinematic translation” takes some unsuspecting twists, including ineffable dissolves, Scott Joplin music (befitting Woody Allen’s Manhattan), and the casting of recognizable indie actors such as Keith Poulson and Mati Diop). (Also, the Argentines can’t speak as rapidly in English, making for a less dense work and perhaps accounting for the longer-than-normal running time.) Camila’s adventures are both amorous and personal, Rohmerian and Rivettean, as she hops between boyfriends and eventually, in a masterfully staged, deeply emotional encounter, meets her absent father (filmmaker Dan Sallitt, a revelation). Always delightful, Hermia & Helena sees Piñeiro making an auteur film that fits into his oeuvre while expanding it in exciting directions—and en route, he makes New York his own.