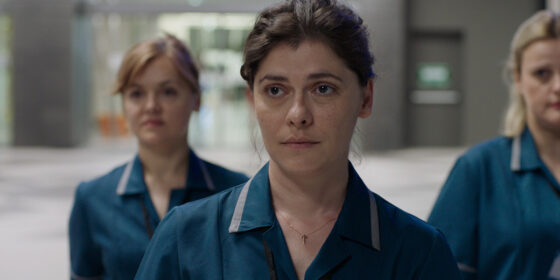 It’s certainly not news to anyone that the economic downturn of recent years has been particularly hard on the Greeks. But Her Job presumes that we won’t get the severity of the situation unless we watch a virtual simpleton get kicked like a dog by family and employer alike. This is a film that clearly thinks it’s operating in Ken Loach territory. But middle-aged Panayiota (Marisha Triantafyllidou) is subject to constant humiliation from her borderline-abusive husband (Dimitris Imellos), her nasty young daughter, and her corporate-tool boss.

Rather than an example of the struggles of the working class, or even contemporary feminism, Her Job feels like an object from another era. One is reminded of the ’50s American game show Queen for a Day, in which wives and mothers compared their sob stories for a chance to secure a tiara and a dishwasher. If Her Job is taken as a national allegory, it’s even more depressing—a portrait of a generation who thought that maybe if they tightened their belts and took the austerity measures in stride, the E.U. would stop smacking them down. As it happens, I think there’s not much here beyond face value.