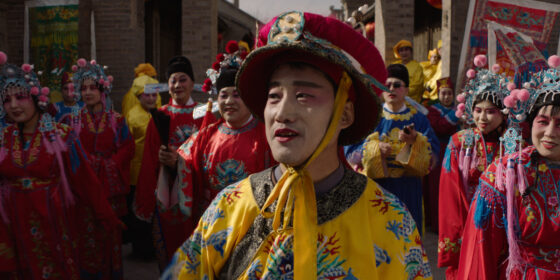 This is a bit like Jia Zhangke’s version of a Ken Loach comedy, and actually that’s not bad. In just under 30 minutes, we witness the closure of a coal mine in Fenyang due to a collapse in the Chinese energy sector. The boss, while a garden-variety curmudgeon, doesn’t even seem like a particularly bad guy, breaking the news that he too is broke, wishing his workers luck, and giving them some braised pork on their way out. From there, The Hedonists focuses on three of the older members of the team (Liang Jingdong, Han Sanming, Yuan Wenqian) as they scan the job listings and go on some fairly quixotic interviews.

Jia employs a rather unusual style of needle-drop music cues (including themes from Mountains May Depart, implying that this film is more tangentially related to that film than it is forward-looking), but that’s not even the most noteworthy formal element here. Several key shots in The Hedonists were shot with cameras mounted on drones, offering a kind of semi-soaring crane work on the cheap. This goes along nicely with the predominant idea that patently absurd capitalist ventures are not only edging out Chinese traditionalism, but repackaging that tradition as a kind of empty signifier. As per the umpteen-thousand think pieces telling us that 2016 is the year cinema really, really dies, Jia seems to be poking fun at the looming threat of his own obsolescence.