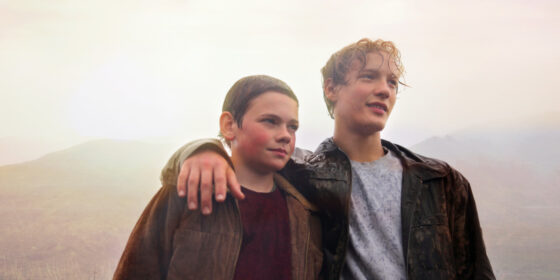 Heartstone is the type of debut film that is brimming with good intentions but ultimately doesn’t make a strong enough case for its existence. Trading in coming-of-age tropes and stock markers of identity, Heartstone at least has the courtesy to spread its youthful anxieties over a stunning Icelandic coastal landscape, allowing its children to skulk around on verdant rolling hills and take truth-or-dare plunges into crystalline lakes and streams.

But as for Guðmundur Arnar Guðmundsson’s specific narrative mien, much of it is sketched in outline very early on and never deepens very much beyond that. Thor (Baldur Einarsson) has hit puberty with a vengeance, which means he is crushing hard on local girl Beth (Diljá Valsdóttir). He is also having trouble maintaining his sanity as the only boy in his household. (Straight from the files: hot-to-trot middle-aged mom; flighty artist-poet older sister; rebel-bitch middle sister.) Thor spends most of his time with best friend Christian (Blær Hinriksson), whose abusive dad makes Thor wonder if maybe it wasn’t so bad that his own pops fucked off to the city to leave him drowning in estrogen.

While Guðmundsson is clearly striving for an observational vibe and easy youth rapport, there’s no avoiding the fact that Heartstone’s plot trajectory has been jury-rigged for maximum angst. One character struggles with his sexual identity. Another is asserting her own desire while unfairly being labelled the village whore. There’s a hyper-aggressive town bully who must be taken down a few pegs in the end. And we’re even given Chekhov’s proverbial gun, which is indeed fired right on cue. None of this compromises the film’s basic watchability, but neither do these contrivances establish Heartstone as the very best thing you could do with your time.