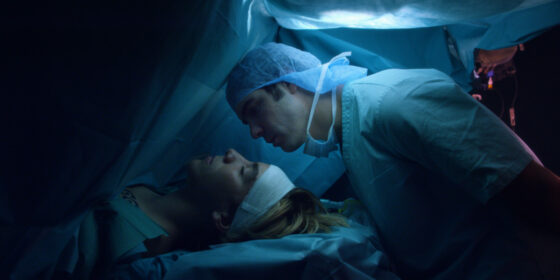 If melodrama as a genre is concerned with the suffering of the heart on a metaphorical level, French director Katell Quillévéré’s third feature Heal the Living takes the matter in an inventive turn, rather literally. In the fluently directed opening sequence, we see a group of teenagers ride away to a remote surfing spot at the sea, enjoying a moment of weightlessness. On the way back, they suffer a severe car accident that Quillévéré illustrates as a big wave breaking right in front of them. Simon (Gabin Verdet) subsequently can’t be saved—he suffers a head trauma and is declared brain-dead. This tragic incident brings Heal the Living, in an almost Almodóvarian manner, to the question of organ transplantation: If Simon’s body can be of use to the living, how does it affect all the people involved in the procedure?

Quillévéré’s script, based on Maylis de Kerangal’s novel Mend the Living, doesn’t play the obvious game. Instead of turning its main focus onto the grieving parents (Emmanuelle Seigner and Kool Shen), or on a conventional ER-like plot of searching for a beneficiary within limited time, the film engages in different narratives of donating and receiving in a more fragmentary and profound way, still resonating within the basic melodramatic premise. With humorous, even quirky observations in the hospital (a male nurse watching a bird singing on his computer; another employee fantasizing an erotic encounter in the elevator) or with a beautiful scene of Simon’s past in which he makes his first move towards his future girlfriend as a biking stunt, Quillévéré broadens the spectrum of the narrative, as if she’s following multiple arteries. Eventually the film shifts to the beneficiary-to-be, Claire (Anne Dorval), a musician and mother of two sons, who is dreading the surgery. However, Quillévéré succeeds in retaining her sense for peculiar moments that avoid sentimentality without neglecting sensations. As Anna reconnects with her former girlfriend, she whispers: “Careful, no powerful emotions.”